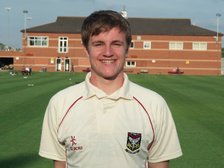 Following last weeks home loss with Disley, Mersey made the short trip over to Wilmslow to face fellow mid table side Lindow CC. Despite predictions earlier in the week that the match could have been a washout, the match was completed without difficulty and with what was to follow, we were thankful for that.

Skipper Ian Hughes won the toss and elected to put Lindow into bat. Lindow set off at a blistering pace as the opening pair of Booth and Robinson hit 27 from the first 4 overs as the home team made a confident start.

That confidence was soon to be dented as Booth was bowled by Alex Ford in the 5th over whilst attempting to hit out. He was quickly followed back to the pavilion in the next over by fellow opener Robinson who was caught in the slips by John Edwards off a Saifullah ball. The momentum continued to swing Mersey’s way as the opening bowlers each took wickets to leave Lindow on 57-4 after 11 overs and whilst Lindow continued to score runs at a pace, wickets from Hughes (LBW) and Saqib Ali saw Mersey still in control with the score 115-6 from 23 overs.

This however was to be last wicket for over an hour as Lindows overseas player, Yates took to the crease and punished the Mersey bowlers. In a fine display, Yates helped Lindow put on 50 runs in his first 10 overs at the crease and frustrated Mersey as he quickly scored runs and when joined by left-handed bat Unsworth, the pair put on an impressive 103 off 109 deliveries in just over an hour with the score ticking past 200 in the 39th over of play and by the time Yates was caught two overs later he had achieved 110 off 94 balls and the score had reached 218.

The departure of Yates soon spelled the end of an innings as Mersey took 3 wickets in 3 balls with Saquib claiming 2 and Ainscough getting a run out and Lindow were bowled out for 219 with 3 overs left to spare.

Despite the late rally, at tea Mersey felt deflated to have let a good position 88-5 turn into over 200; the total was surely too difficult to catch.

In a similar fashion to Lindows start, Mersey opener Josh Ainscough hit 12 runs off the 1st over. It was a sign of things to come. He and Edwards looked confident from the beginning, punishing the bowlers with an attacking stance as runs continued to mount up. The strike changed regularly and by the 13th over, the pair had already reached fifty. Ainscough in particular produced some excellent shots and found the boundary with increasing regularity. He eventually reached his 50 in just 60 balls.

By the time the first wicket of Edwards fell (LBW) in the 19th over, the partnership and reached 89 and Mersey were in a very strong position.

As the game wore on, Mersey continued to assert pressure with a sensible display of batting as they were able to find the gaps in the field, without needing to take risks.

Despite losing the wicket of Saj Ali quickly, Josh and Dom Gandy continued to score freely with Dom hitting two huge sixes resulting in several calls for the spare ball; making for an entertaining spectacle for all those in attendance.

Eventually, after 2 hours at the crease Ainscough’s innings came to end having reached 92 in 123 balls – a brilliant performance, deserving of a ton and Mersey’s highest score of the year. At this point the score was 174-4 after 38 overs.

Hassan Rashid and Ayaz Cheema, eventually eased Mersey over the line but not before making their own (rather tidy) contributions of 33 not out and 18 not out respectively and Mersey reached the total with 3 over to spare, surpassing 200 for the first time this year.

From frustration to celebration in just a couple of hours, this was without doubt Mersey’s best performance of the season and one which emphasised that solid batting right the way down the order is the key to winning matches.

MOTM – Easy one this week – Josh Ainscough – for his superb batting display which included 14 boundaries topped off with a run out and a catch.

DOTD – Saiffy – For running into Alex Ford in the outfield resulting in a dropped catch.