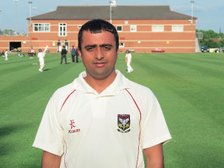 Mersey suffer 2nd defeat of the season by 72 runs

Following last weeks convincing win against Runcorn, the 1st team made there way across Manchester, to The Beets, home of
Ashton - on Mersey CC with vice captain Abbas Shah taking charge of the team.

On a windy day, Mersey lost the toss and Ashton elected to bat with openers Thomason and O'Gara. It did not take
long for Mersey to strike as Mohammed Saifullah, making his first appearence for the 1st team this season, took the wicket
of Thomason with Jordan Barnett making a catch with the fourth ball of the day. The positive bowling continued and on
a relatively damp wicket, the ball appeared to work to be doing a lot as Ashton struggled to settle at the crease
with Saifullah and Alex Ford helping to keep the score to a minimum. My fellow scorer, commented on the steady bowling of
Ford who finished the day with 10 overs for 26-0 and remarked, quite rightly, that he ws unlucky to not get a wicket.

The introduction of Saqib Ali at the 10th over brought immediate success with as No. 3 batsman James Lines found
himself caught and bowled with the score 29-2. This would be the last wicket to fall for almost an hour as new
batsman Turner looked more confident in his batting and steadied Ashton. Turner would go on to make 51 off 70 balls
but it would be fair to say he was the only stand out batsman for Ashton as he stayed resolutley at his crease.

Wickets continued to fall however in a steady but not particularly quick fashion, as Hassan Rashid took wickets in
successive overs as Ashton fell from 66-2 to 78-5 in just 5 overs giving Mersey back the advantage as they looked
to make quick work of the tail end. This proved not to be the case and whilst Mersey continued to bowl well, Ashton
held firm and kept the scoreboard ticking over. As the innings wore on, Saqib took four more wickets to finish with a
fiver; 2 of these wickets were caught behind by wicket keeper Dom Gandy who produced an excellent performance behing
the stumps giving away just 1 bye over the course of the innings. Ashton eventually managed to reach a respectable
total of 159-9 over 45 overs which was way down on their innings total of over 250 the week before. While Mersey
will have felt they had chances to restrict the score further, they could be positive in knowing 160 seemed to be
a target firmly within reach.

Mersey began the attempt with Ross Bailey moving up from the 2nds to partner regular opener Gandy but despite hitting
a quick boundary,he was quickly back in the pavilion; bowled in the 2nd over by Knowles.Things did not improve for Mersey
as they slipped from 32-2 to 61-6 in 10 overs as Hassan Rashid, Cheema, Shah and Waqar Rashid each failed to score
more than a handful of runs with only Dom Gandy, bucking the trend producing a confident innings making 38 off 57 before
bowler Higgins found him LBW. Despie efforts from Ford and Barnett, Mersey were all out in 30 overs with only 87 runs
on the board.

A disappointing end to the day for Mersey which had looked more hopeful at tea with batsman falling before any
momentum could be built.

On Saturday, Mersey are on the road again at Prestbury hoping to get back to winning ways.

Mersey MOTM - Dom Gandy - for an excellent display behind the stumps; only giving away 1 bye with 2 catches; matching last weeks
total and a score of 38 in front of the stumps.

DOTD - Can't give this to anyone in particular, but the middle order batters will be disappointed to have been dismissed too quickly.