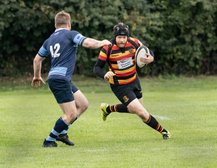 For their first away league game of the season, Moor travelled to West Derby in Liverpool to play Sefton with a much changed side from the week before, due mainly to injuries, but still fielding a young side, with an average age of under 25 and yet another ex-Colt, Josh Tate, making his 1st XV debut.

Within a couple of minutes of the kick-off, the opposition had their first points on the board with a converted try, when an attempted floated pass along the Moor back line was intercepted by the Sefton centre who then fed their MOM and full-back, Nathan Lewis, who sped in to touch down between the uprights. From that point onwards until the interval, most of the game was played in Moor’s half of the field as the opposition’s much more physical forwards and speedier backs kept Moor pinned down, but the game itself was one of un-enforced errors from both sides, providing a stop-start affair, with Moor especially guilty of not being able to get into any sort of rhythm.

Midway through the half and again from another knock-on by the visitors, the home side were awarded a scrum some ten metres from the Moor line, which they won, setting up a forward drive, resulting in another converted try. Sefton were then penalised from the kick-off, allowing full-back Ben Haspell to kick to touch and provide Moor with an attacking lineout, their first of the game, but unfortunately, this was lost, which was a recurring feature for Moor over the whole game. Nevertheless, the home side did not accrue any benefit from this as they then knocked-on, providing Moor with a scrum. This was won and the ball was quickly fed along their back line, allowing winger David Adebo to score in the corner, but Haspell’s attempted conversion fell just short.

The visitors soon found themselves again having to defend and another knock-on provided Sefton with yet another attacking scrum. This time their No. 8 picked up and the ball was fed to Lewis who scythed his way through close to the scrum to score, again converting the try. This pressure was maintained right up to the break, not helped by Moor’s inability to keep hold of the ball for any length of time, but fortunately for them, Sefton were also guilty of squandering chances, although they did kick a penalty in extra time, to make the half-time score 24-5.

For the first ten minutes or so of the second period, Moor did begin to get into the game, executing some long-range kicks to establish more advantageous positions and were also able to keep hold of the ball for extended periods, ensuring that the opposition were kept on the back-foot. From one of these moves, the ball was passed from one side of the pitch to the other, followed by a kick ahead, ending up in touch just short of the Sefton line. Not only did Moor pinch the resultant lineout, but the home side were also penalised, allowing the visitors to quickly take a tap penalty. Although the subsequent drive was held up over the line, this resulted in a scrum to Moor, from which scrum-half Elliot Mepham picked up, threw a ‘dummy' pass and dived under the defence to score, converted by Haspell.

This narrowing of the score line briefly provided some hope that Moor might mount some sort of recovery and for a while, they managed to defend and clear their line whenever it was in danger of being breached. Eventually on the half hour mark this defence was beaten as, following the ball being recycled between forwards and backs, Lewis again joined in at speed to feed his left-winger, who squeezed in at the corner for their bonus-point try. Moor came straight back into Sefton territory, forcing another penalty, which was kicked to touch, landing a few metres out from the opposition's line, to set up yet another great attacking position. As had happened so many time before however, the lineout was lost and the home side counter-attacked, ending up in a similar situation in the opposite corner of the pitch with a lineout of their own, which was cleanly won, setting up a rolling maul and resulting in a converted try. This effectively ended the game as a contest and Moor spent the remaining minutes on the defensive, conceding yet more points in injury time, as a pick-and-go following a Sefton scrum, went unchallenged, resulting in another converted try and a well-earned 43-12 victory.

This was a disappointing result and performance from Moor, but despite the error-strewn game, it did provide the younger members of the squad with valuable game-time.

Moor have no game next Saturday, but resume at home to New Brighton on 2nd October, k.o. 2:15 p.m.