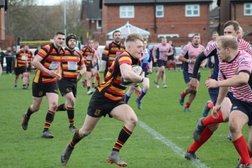 Moor hosted third-placed Oldham at home on Saturday and having already drawn with them in the first league game of the season, way back in September, and beaten them in a league cup game in November, the possibility of another victory was on the cards, but with the visitors on a run of six straight victories and having only lost three league games all season, this might have been a difficult one to pull off. And so it proved to be as, despite Moor leading at half-time, Oldham then took control of the second half to run out winners, leaving Moor with the consolation of a losing bonus-point.

As has happened so often this season, Moor opened their account within a few minutes of the start when, from the first attack of the game, the ball was passed down their back line and left-winger Trevor Chappell looped around to join the line at pace and score in the right-hand corner, leaving skipper Danny Child, playing out of position at scrum-half, with a difficult conversion, which he narrowly missed.

Play was then confined to midfield for the next 20 minutes, with both sides having a fair share of the ball, but effectively cancelling each other out. Eventually, Oldham managed to produce an overlap from one of their attacks and scored an unconverted try in the corner. Back came Moor and following another break by their three-quarters, full-back Chris Ogden-Smith joined this line, drew his man and put right-winger David Adebo away for an unconverted try in an almost identical position to their first. With no further score in the half, the interval was reached with Moor 10-5 to the good.

The visitors then upped the intensity of their game in the second half to score three unanswered tries early on. Their first score was, however, slightly fortuitous as a Moor player, thinking that he had been tackled into touch whilst defending the line, released the ball, only for one of the opposition to pick it up and jink his way over to score between the uprights, as most of the Moor players were flat-footed, expecting a lineout.

The next Oldham score, and certainly their best of the half, came from an attacking lineout, when the ball was recycled along their three-quarter line and their fly-half conjured up an inside pass to his full-back, who burst through to score another converted try between the posts. From the resulting re-start, Moor managed to kick the ball out on the full, providing the visitors with a scrum back on the halfway line, from where the ball was quickly moved along their backs, resulting in another try, this time unconverted, in the corner.

To Moor’s credit, having shipped 19 points in only 15 minutes, they continued to take the play to the opposition, resulting in the latter having two players yellow-carded in quick succession as they were adjudged to have impeded the Moor attacks. Unsurprisingly, this numerical superiority paid off for the home side, when shortly afterwards they were awarded a penalty try as Oldham were penalised whilst attempting to stop a Moor drive on their line. With either a draw or a victory now a distinct possibility, Moor threw everything at Oldham, but somehow the visitors managed to repel this onslaught and even deep into injury time, when they had yet another player sin-binned, they held out to win a hard-fought and thoroughly absorbing game, 24-17.

Moor play their final league game of the season next week, when they entertain West Park (St. Helens) at Green Lane, k.o. 3:00 p.m.