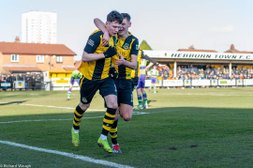 The 22-year-old forward departs to the Cumbrians on good terms and says he “will always be a fan” of the Hornets.

As part of the deal, Carlisle United have agreed to a first team friendly with the Hornets to be scheduled in preseason ahead of the 2021/22 campaign.

The two clubs had positive discussions while arranging the transfer and made a good connection which will continue over the coming months and beyond.

Scott joined Hebburn from Dunston UTS in January 2020 and made his debut as a substitute in the FA Vase fifth round where he provided an immediate spark with his pace and energy helping to create chances from the moment he came on.

He has continued to shine for the club ever since with one of his early performances being a brace in the 2-0 home win over Plymouth Parkway in our FA Vase quarter-final.

As the 2019/20 season was brought to a premature end, this will have no doubt come as a blow to Scott who was on a run of four goals from four games.

However, this would prove to be just a precursor for the form he would find in the 2020/21 season.

After struggling to nail down a starting spot at the beginning of the season, Scott went on a stunning run of goal-scoring form which brought his season total to 22 goals in all competitions in 17 appearances (11 starts).

This prolific form earned him interest from professional clubs and after a month on trial with Newcastle United which didn’t yield a deal, he joined Carlisle United for a trial spell.

During his time on trial with the Cumbrian club he impressed manager Chris Beech which earned the Huddersfield Town academy graduate a return to professional football.

On Scott’s departure, Hebburn Town manager Kevin Bolam said: “Obviously I am over the moon for the lad!

“He’s been brilliant since he joined us. He’s a humble young lad who showed a fantastic desire and willingness to learn.

“This is another fantastic example of the door never being shut for opportunities in the professional game.”

Director of Football, Stephen Rutherford, added: “I’m really pleased for Cedwyn, he’s come to the club and always been honest with us that he’d like to get back into the professional game.

“You never know if players will get that break, but he’s a lovely lad who has worked hard and been a gem on the field. His goal record speaks for itself.

“The club have helped facilitate the move and although it’s a shame to lose such a talent, we have to wish him all the best.

“We’ll be watching that teleprinter on Sky Sports waiting for his name to appear, which will probably be quite a lot.”

“I’d like to thank all the staff, players and fans for the continued support throughout my stay. Without them, I wouldn’t be in this position, so I’m very grateful for that.

“I’m proud of what we have achieved in this last year. Although I won’t be able to see out the season and both Vase competitions, I’m very confident that the team and the staff at Hebburn will keep succeeding.

“I’ll always keep an eye on the results and will be back over to watch whenever possible. The club will hold a special place in my heart.

“Even though I’m no longer a player, I will always be fan!”