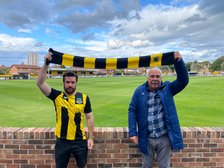 Hebburn Town are delighted to welcome dynamic midfielder Damen Mullen to The Green Energy Sports Ground ahead of the 2020/21 season.

The 31 year old midfielder penned a 1 year deal with the hornets with a further option after moving from National League North outfit Blyth Spartans FC.

Damo as he’s known to friends and colleagues spent 7 seasons with Spartans and played a crucial role in midfield and defensive midfield areas. He also spent time at Morpeth Town on a dual playing contract in a similar role and was a FA Vase Winner with the highwaymen back in 2016.

Damo said of his move to the hornets “ Delighted to have signed for the club. I have been very impressed with the setup and the people involved at the club especially in how they moved to get the deal done. Really looking forward to the season ahead and with the squad Hebburn already has we should be challenging on all fronts.”

Manager Kevin Bolam said “I’m Over the moon to get Damen on board. He will be a fantastic addition to the group and will provide more experience and quality to the squad. He is a leader on and off the park and someone who can slot into a few different positions for us if need be”

Chairman Vin Pearson added “When Kevin realised Damen was available he did some homework on the lad, we met him last week, he’s a lovely person who wants to be at the club and be a big part of our project. I’m pleased we could agree a deal and look forward to him doing the business on the pitch. He’s another quality player that makes the competition for places strong. Welcome to the club Damo.”