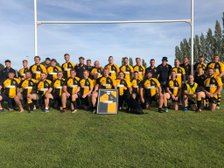 MOM Cosham scores 3 tries in a critical win away from home.

On a wet and cold afternoon, Hellingly arrived to face Brighton RFC in a game they knew was crucial to their season long objective of securing a top 2 place. The year of 2017 did not start as the team would have liked, losing to Uckfield the previous week but Captain David Sands dismissed the negativity and saw Brighton as an opportunity to get back to winning ways and load the pressure on the teams above, not allowing them to rest on their laurels.

Hellingly arrived with some injuries, particularly to the number 2 shirt as Dan Halls and Vice-Captain Dan Dibley were both ruled out of this week’s fixture. Fortunately, Hellingly had players wishing to step forward and help their club. In the first instance, Connor Stratford (Hellingly number 7) and James Maunder (Hellingly Number 1) both agreed to play hooker if required. A position that literally means getting your head stuck in to the game and frankly one, as a number 8, I would simply never imagine wishing to play.

Equipped with James Streeter, a tighthead prop that on his day can give any back a run for his money in a sprint, Hellingly had their starting front row. It was further strengthened, in the final hours before kick-off as Matthew Sellens asked on social media what time the game kicked off “to watch”, only to later being playing 40 minutes himself. What started as a stressful mission of finding a front row, turned into Hellingly have a scrum that was both full of pace, strength and experience.

Playing on Brighton’s first team pitch, Hellingly opened their account with a touch of class between Jack Cowell and Huw Jones, who worked in unison with back to back passes allowing Jack to go over in the corner. This was converted by our very own Welshmen, who displayed a performance Dan Bigger would have been proud of (just without any good dancing).

0-7 up inside a minute, there is no doubt that Hellingly felt there was a potential cricket score imminent, but Brighton put any such thoughts to bed as they took the game by the scruff of the neck and placed Hellingly under all sorts of pressure. Hellingly soon found they were trailing, with the game looking as if it could slip away, until Sam Cosham intercepted a high ball and ran half the length of the field to score. Shortly before halftime, a similar try was scored by Hellingly’s number 8 who hanging on the wing, looking for his time to shine, received a somewhat aimless kick with no defensive line in front of him. With David Sands guiding him to run forward, Grey could run into the corner unopposed.

Having finished the first half positively, Carl Freslov (Coach) and Captain Sands made the decision to inject some pace and build the momentum. Dave Searle (Scrum half), Toby Streeter (Second Row) and Matthew Sellens (Tighthead prop) all took to the field and had a remarkable impact on the game.

The second half saw Hellingly score an additional 3 tries and a drop kick from the returning Matthew Sands. It is just as well he was successful, as he had been discussing his intention to go for the drop kick no less than 20 seconds before he did, whilst nattering “I’ve got this, this is my time”.

Today’s game was extremely competitive and Brighton provided a challenge that will be much appreciated in preparation for the next home game to Burgess Hill. Some fantastic tries were scored, including a 40 metre try by the 17-year-old Toby Streeter but a special recognition must go to Sam Cosham, who despite running away before buying the jug at the end of the game scored 3 wonderful tries and is this week’s Man of the match.

"I have just heard that the Saxons beat Eastbourne at Home, so winning here today against Brighton has been a really proud day for me at this club. It was not always easy and we obviously have a lot to work on but putting two winning sides out today, despite the unavailability’s faced this week is a credit to the depth this club is beginning to create. We have given ourselves an opportunity this week and remain on course to achieve something special. We just have to keep our focus, train hard and keep our eyes on the prize.”