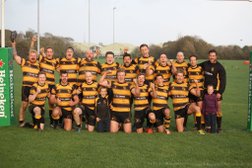 Hellingly Dominate Eastbourne Despite the Weather:

Another 5 tries and another 5 points away from home.

On a windy and wet Saturday afternoon, Hellingly travelled down the road to play Eastbourne RFC. A game that carries great history for both clubs and a team that Hellingly has often found themselves losing to. This year was always to be different however. We were unbeaten, having already taking maximum points from seemingly stronger teams such as East Grinstead, so the expectation was that we would win.

The challenge this week would be more around tactics, specifically how we approach the weather. It would also require composure and professionalism, knowing Eastbourne would want to front up and of course, not lose on their home turf. We also knew (and unfortunately later experienced) that Eastbourne have some isolated individuals that carry an "at all costs” attitude in attempting put players off their game, which is a great shame to all involved in this great sport.

Eastbourne did score two tries when they had the wind to their advantage, both of which were taken well by the Speedy Eastbourne Winger. A player that will undoubtedly continue to threaten defences if given space. However, you cannot win games without the ball and possession was dominated by Hellingly in both halves.

In the first half, forced to play a “tap and go” game (as attempting to kick would see the ball go over our heads) and lead from the front (literally) by Dan Halls, we put a significant number of phases together, ultimately leading to either a score (Mark Harris and Myself) or being awarded a penalty. It is a shame that the wind didn’t allow us to take more opportunities but at half time, although “on paper close", we knew that we would now comfortably win, with the second half still to play and the wind remaining a factor of the game.

In the second half, as expected, Eastbourne were forced to run and Hellingly would continue to flood Eastbourne with attacking phases. Knowing you cannot simply defend for 80 minutes, it was no surprise that after scoring a further three tries, two converted superbly by “the general” and our Man of the Match David Searle that we had convincingly won the game.

With our unbeaten record still securely intact, we now look ahead to Ditchling next week, who I am sure, despite the league table results, will prove a competitive outfit. Thank you too to Eastbourne for kindly providing us with a field to play on next week, as our pitch takes its last couple weeks of rest before being played on for future home fixtures.

Key Facts of the game:

Man of the Match: David Searle