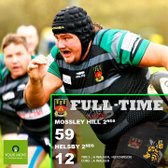 With Helsby 1st Team having made such a positive start to the season, Helsby 2nd Team got their own season under way on Saturday and with 21 players in the squad, hopes were high that they too could get off to a winning start. Facing a Mossley Hill side who had conceded the previous week, Helsby were met by a stronger than expected Hill side however and despite taking an early lead, this would ultimately turn into a bad day at the office for Helsby.

The match started brightly for the visitors, with fly-half, Alex Walker opening the scoring after just three minutes, following a powerful burst from Mark Ryan who forced a penalty from Hill. Second row, Lewis Ainge then gained further ground for Helsby, before Walker danced his way through the opposition defence to score out wide on the right, adding the conversion himself to put Helsby 7 - 0 up. Unfortunately, Helsby’s joy wasn’t to last long though. Within five minutes Mossley Hill had pressured the Helsby line and debutant winger, Lewis Hutchinson found himself sent to the sin-bin – perhaps harshly penalised for naively not rolling away. The Liverpool side then made the extra man count, crashing over for two tries in quick succession to take a 10-7 lead and despite showing brief glimpses of their potential – Walker again causing damage, with good support from James Jaundrell – too many mistakes under pressure meant that Helsby failed to capitalise when it mattered. After parity was restored after the sin-binning, Helsby introduced Carl Howarth to their line-up, along with replacement prop, Liam Rowland - returning from injury - but Hill nevertheless continued to find gaps in the Helsby defence, their strength up front and quick distribution and pace out wide proving to be too much for the village side. And so it was that Helsby soon found themselves leaking a further two tries, before indiscipline caused the visitors further problems – Ainge also seeing Yellow, along with a Hill counterpart as the contest showed signs of deteriorating into a brawl. As the half drew to a close, despite having fielded a strong bench Helsby must have wished that Lady Luck had been one of the named substitutes, a kick-through from Hill resulting in a wicked bounce that fell the wrong way for replacement full-back, Lee Thomas and resulting in a fifth try of a very disappointing first half for Helsby. Half-time : Mossley Hill 2nds 31 Helsby 2nds 7.

After the break, the introduction of Player-Manager, Stuart Howarth did nothing to stem the tide from Hill and Helsby received their third yellow card of the afternoon mid-way through the half, when Ryan was also sin-binned for a reckless tackle. Helsby nevertheless showed glimpses of what they were capable of at times – veteran hooker Jimmy Walker rolling back the years along with Jason Hocking in an unfamiliar Number 8 role, father-and-son pairing Tim and Alex Rutter showing their usual grit and determination and newcomers for this season Lee Hughes and Paul Bye both showing much promise on their competitive debuts. Injuries to front-rowing pairing Dave Reid and Peter Ruane added to Helsby’s problems though and despite good performances from youngsters Tom Owen and Danny Norrey – the latter having a particularly impressive first outing at flanker – Hill scored a further four tries without response. Just as it looked as though Helsby would have nothing to show from the afternoon though, in the final passage of play Helsby managed to end the day as they had started it - Jaundrell clearing the Helsby lines with a monster kick from within his own half, which was chased down by winger, Hutchinson who’s eagerness to make amends for his first-half misdemeanour was well rewarded when he did exceptionally well to beat the Mossley Hill fullback in the race to touch down and make it a try-scoring debut. Full-time : Mossley Hill 2nds 59 Helsby 2nds 12.

Helsby will be disappointed with this result, but this was a strong Mossley Hill side and the Helsby XV that were selected are certainly capable of producing more than this score-line suggests. The teams in Division 5 West face a long season ahead and the new recruits who have joined Helsby during the off-season will ensure that it’s not just the 1st XV that will earn the headlines during 2018-19.

Man of the Match for Helsby was flanker Danny Norrey, who’s high-work rate in the back-row and athleticism in the line-out should add a new depth to the Helsby pack this season. This Saturday, Helsby 2nds will hope to make amends and get their Division 5 West campaign off the ground when they face Wirral 4ths at home in a 3.00pm kick-off at their Chester Road base.