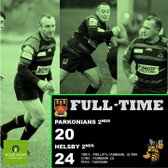 With more than twenty players unavailable currently, Helsby did well to fulfil this fixture and whilst it was hard fought, the team dug deep to pull off a long overdue and much deserved first win of the season.

Playing the first half into strong winds and rain, Helsby took an early lead after just five minutes. Sustained pressure in the Parkonians half resulted in a line-out on the 22m, from which James Phillips showed excellent footwork to evade the home defence and score beneath the posts. Matt Fairbank added the extras with the boot and only two minutes later extended Helsby’s lead with a try of his own. Helsby’s pack did well to turn over the ball after a Parkonians scrum on the half-way line and Fairbank took advantage with a superb break – weaving his way through the Parkonians back-line for Helsby’s second score of the afternoon beneath the posts and an easy conversion. From that point though, Helsby were largely on the back foot – Parkonians taking advantage of the terrible conditions and keeping Helsby pegged back throughout the first half. A Parkonians try after twelve minutes started the fightback and then after twenty-two minutes despite excellent defence from Helsby wing, Liam Barber, the home-side pack recycled the ball to crash over from short distance for another try. With both conversion attempts failing, however, Helsby’s lead remained intact.

With conditions dictating that this was very much a forwards game, Helsby’s pack stood firm in the scrums - Oliver Nichols and Tom Hardlow turning in impressive performances alongside Lee Hughes - showing much early promise in this, his debut season in the Helsby front-row – together with experienced campaigners Jez Anderson and Alex Rutter, who for the second week in succession excelled in the back-row. On the stroke of half-time though Parkonians took the lead after a break in loose play down the Helsby left wing saw them score their third try of the afternoon. With the conversion attempt again missed, that brought an end to the half and what was turning out to be an absorbing contest to watch, with very little to separate the two teams. Half-Time : Parkonians 15 Helsby 14.

Having been forced into one change before the break – Tom Harding coming on to replace injured winger, Lewis Hutchinson with both making solid contributions in both defence and attack – Helsby made further changes for the second half, Olly Dier excelling in the back-row as a replacement for Hardlow and Dave Glynn replacing Barber. Sadly for Helsby though, the half-time break also brought a significant change in the weather conditions, with the heavy rain stopping and the strong winds dying to make the second half a more even affair. Helsby’s challenge was made all the more difficult five minutes after the re-start when flanker, Lewis Ainge was yellow-carded for a high tackle. The visitors did well to resist continuous pressure from Parkonians during the ensuing ten minutes – Cameron Smith showing much composure at Fullback despite being played out of position and veteran scrum-half, Tim Rutter showing his usual grit behind his temporarily weakened pack. When parity was restored the game remained deadlocked and stayed that way until the sixty-fifth minute, when Parkonians extended their lead thanks to a try through the middle of the park. With the relatively straightforward conversion attempt sailing wide, however, Helsby were left with a glimmer of hope - needing only one converted try of their own to re-take the lead.

With only five minutes of the game remaining, Helsby’s dogged determination was finally rewarded – excellent work by the forwards and in particular evergreen hooker, Dave Harrogate creating an opportunity for the backs to spread the ball out wide. Winger, Dave Glynn – making his first appearance for Helsby in almost a year – finished well in the left hand corner and then Helsby faced a nervous wait, whilst fly-half, Fairbank lined up the touchline conversion attempt. In still difficult conditions, Fairbank did well to hold his nerve – dissecting the uprights to give Helsby a single point lead.

With time now running out for Parkonians, they succumbed to more pressure from Helsby and conceding a penalty ten metres inside their own half, skipper Paul Dempsey took the brave decision to go for goal. With only two minutes now left on the clock, up stepped Fairbank once more to launch a huge kick to make it a perfect four from four from the boot and extend Helsby’s lead. There was still time for one final Parkonians attack, however and with only a single score separating the sides it required one more huge defensive effort from the village side to hold out. From a Parkonians scrum just inside the Helsby half, Helsby new recruit Adam Smith – making only his second appearance for the club and switching to flanker for the closing stages of the game – made a crucial tackle when Parkonians attacked the blindside. That proved to be the final passage of play, the refereeing blowing the whistle to bring an end to a cracking match, which arguably neither side deserved to lose. Full-Time : Parkonians 20 Helsby 24.

Man of the Match for Helsby was Fairbank, for a solid display and a perfect performance with the boot. The result means that Helsby climb to 8th in Sales Sharks Division 5 West, but more performances of this nature will surely see the team gain further ground on their rivals as they now lie only one point behind Anselmians and two points behind 5th and 6th placed Wirral and Parkonians themselves.

Next Saturday, Helsby 2nds return to action in a home game against Prenton 3rds who themselves notched up a 25-19 win at Parkonians only last weekend. If these two results are anything to go by, it promises to be a match not to be missed. Kick-off is 3.00pm - spectators welcome.