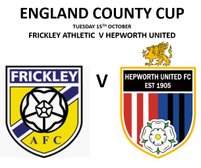 Senior Men's team faces their highest ever ranked opposition in the cup this week...and are on Bet 365 too!!

Since leaving the Huddersfield District League 4 years ago the Senior men's side have continued on the up gaining 2 promotions in the Sheffield and Hallamshire Senior League.

This now gets an entry in to the England County Cup where this week the team face Frickley Athletic who are the highest ranked team we have played in a competitive game.

The game will be under floodlights and is also the first ever game to be featured in online betting sites!! we are seen to be rank outsiders with an 11/1 odds of a Hepworth Win. Good Luck lads.

The club is on the up and good luck to all our teams this season.