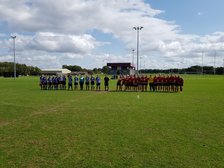 Beaten but not Defeated

The ladies squad travelled the short distance to Sheffield Wednesday Firsts for their first ever game at the North East Regional Womens Football League and were unlucky to be knocked out of the League cup at the first hurdle. Hepworth who had several new players making their leagu debut and with several long term injuries were forced to shuffle things up and used the match as a valuable extra training match. The home side were shown a little bit too much respect early on as Hepworth looked to eases their way into the match following a short and hurried pre season due to the early season kick off and holidays. The early signs were very encouraging and it was Hepworth who had the better clear cut chances early on as first a Becky Kirk free kick on 10 minutes was well saved before captain Jo Forrest shot straight at the keeper from a corner on 12 minutes. Wednesday had their first effort on 15 minutes when a long range effort was well handled by Rebecca Harper in goal. Hepworth started to relax a little after the quarter hour mark and chances came and went for the visitors, further pressure forcing several corners, and Claire Berry and Merita Prebrezova both saw efforts go wide. Hepworth replaced Jo forrest and Rebecca Kirk in a like for like swap with Emma Holroyd and Kim Antonio taking to the field with both slotting in well. Forrest who was carrying a slight groin injury wa rested and Kirk playing in a new attacking role had lead the frontline well in her first start up top. Hepworth were looking good and a Renata Feherova free kick on 21 minutes went just over the bar.
Wednesday broke quickly and a misjudged clearance while under pressure let the home side in on goal and their pacey striker rounded Harper in goal and despite her great effort to recover Rebecca Purchon could only deflect the ball into the net to put Wednesday 1-0 up.
Hepworth didnt sit back but instead looked to take the game to Sheffield in a series of quick counter attacks and from a resulting corner renata Feherova was unlucky to be have caught offside when clean through on goal in a very tight decision. Wednesday caught Hepworth on the break again to extend their lead as too many players were caught on the outside looking in and reacted too late to stop a good cross into the box bering converted to make it 2-0. hepworth made two further substitutions with Rosie Quigg replacing feherova on the left and 16 year old Catrina (Kate) Govan making her debut replacing Claudia Cleary on the right. The fresh legs added a further boost to Hepworth's attack as they looked to get back into the game forcing several corners again but they could not take advantage of their pressure.
Hepworth came out strong at the start of the second half as they needed to do and tried to convert all their pressure into goals. A great move from defence into attack saw Purchon move the ball to Holroyd who in turn moved it out to Quigg on the left, her surging run saw her find time and space to cross to Rebecca Kirkmbut her flick went agonisingly wide of the goal. Shortly after Kim Antonio saw her 30 yard free kick hit the roof of the net when some on the sideline thought it had gone in. On 70 minutes excellant work by Kirk set merita prebrezova up but she fired her effort over the bar and another chance went begging. Hepworth used their rolling substitutions well and Renata Feherova and Jo Forrest were brought back on and their good run and passing move set up Rebecca Kirk but her effort was blocked on the line at the far post and forced out for a corner. Receiving the ball straight back Renata was sent clear on goal but her shot as she rounded the keeper was just agonisingly turned on to the post and out for a corner and Wednesday survived again. The resulting corner was superbly met by Laura Hirst but she saw her great header come back off the bar before being scrambled away in desperation. The visitors threw everything they could at Wednesdays goal in the remaining 9 minutes but the home side manged to hang on and move through to the next round.
There were lots of possitives to take from the game as Hepworth showed that they have what is required to upset the odds at this level and the squad remained possitive as they look forward to their next match in two weeks at home against Pride Park Ladies in the SSE Womens FA Cup.
Todays players player of the match was awarded to Rebecca Harper who pulled off some great saves during the match narrowingly pipping Laura Hirst and Renata Feherova to the award.
Share via
FacebookTwitter
https://www.pitchero.com/clubs
Recent news