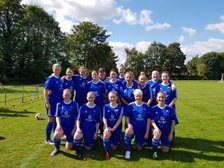 Down but not Disheartened

Hepworth Ladies in their 10th year travelled to York RI on their league debut in the North East Regional Womens Football league Southern Division. On a warm sunny day the squad were full of optimism, the boom box was banging out the tunes as per usual and unfortunately hangovers were banging also !
In front of an expectant crowd of around 30 both teams took to the pitch to start the 2019/2020 campaign and Hepworth started the brighter taking the game to the home side from the off as they pushed forward and had a couple of half chances within the first 10 minutes. On 11 minutes Renata Feherova broke well down the left before passing inside to Claudia Cleary who saw her shot inch narrowly wide of goal. Almost imeadiately York counter attacked and caught Hepworth napping as they were allowed to cross and volley the ball home unchallenged to go 1-0 up. Hepworth went on the attack from the kick off and Hannah Nicholl who was looking lively up front was upended and forced to come off with nan ankle injury, certainly not the start both Nicholl or Hepworth wanted. Rebecca Kirk replaced Nicholl in the 14th minute and as Hepworth reshuffled they were caught napping again as a York player was left unmarked 25 yards out and she drove the ball past Rebecca Harper in goal to make it 2-0 against the run of play. Hepworth again took the ball forward from the restart and forced a corner straight away, Feherova took the corner kick and found Kirk who won the ball in a crowded area and forced it over the line to pull a goal back 2-1.
York then hit straight back and again Hepworth showed far too much respect and allowed them too much space and paid the price as another unmarked player was gifted the chance to lob Harper from 25 yards out on 19 minutes when on any other day Harper would have had it easily. Hepworth made a couple of quick substitutions as Rebecca Purchon replaced Lucy Pickles and Catrina Govan replaced Paige Green who had been bumped over hard and suffered a shoulder injury. The visitors started to pass the ball around and control the game more, gradually easing themselves into the match. Their passing and movement improved vastly, yet they just couldnt find the final end product of a goal despite having plenty of the ball. On 37 minutes Kim Antonio entered the match replacing Merita Prebrezova who was struggling in the heat somewhat and not having her usual grip on the game. Antonio's introduction settled the team down again and their flowing football reappeared once more.
Following a few pointers at half time from the coaching team of the "Three Amigos" Hepworth were again playing the better football and with just 3 minutes gone in the second half they were unfortunate not to have pulled another goal back. Some good play by Kate Govan and Renata Feherova down the left saw a quick one two which sent Feherova free, her pass to Rosie Quigg was quickly moved on to Rebecca Purchon whos 20 yard effort whistled over the bar. Another Feherova cross 4 minutes later was well met by Becky Kirk who headed home both hers and Hepworth's second to make it 3-2. It was game on and pretty even till the 59th minute when a poor pass out from deep in their own half was forced due to a lack of movement when required. This lead to a breakaway goal for York to make it 4-2. Hepworth brought Lucy Pickles back on for Feherova on 69 minutes and switched Quigg onto the left and Govan onto the right to spruce things up a little. This imeadiately caused problems for York and Hepworth won a free kick out on the left. Kirk looking for her "hat trick" stepped up but saw her direct free kick go narrowly wide of the far post through a crowded area.
Hepworth were then guilty of some tired defending as possibly Yorks best player was allowed to run the ball into the corner surrounded by two or three defenders she was allowed to turn and swing the ball over on her good left foot, the cross was met well and put in the net to make it 5-2 against the run of play. Two goal hero Rebecca Kirk was then forced off the field following a further injury to her knee which was heavily bruised from last weeks match, with captain Jo Forrest replacing her. Jo who had given her all throughout picked up the challenge again and worked hard forcing York back. Kim Antonio had a chance with another free kick on 85 minutes which just curled agonisingly wide of the near post with the keeper nowhere. Kate Govan had an effort go just wide and Jo Forrest saw a couple of shots go straight at the keeper and just wide on the turn. To summerise Hepworth have nothing to fear, they had controlled long periods of the match, had chances and worked hard. They just need to be more disciplined, more focussed and more clinical and results will come with some upsets definately on the cards. There were plenty of positives to take from the match, a good defensive partnership and back four was in the making, a good captains performance and some individual efforts from players who gave their all. The players player of the match award was jointly won by both Jo Forrest and Kim Antonio who both just pipped Laura Hirst and Rosie Quigg to the award.
Share via
FacebookTwitter
https://www.pitchero.com/clubs
Recent news