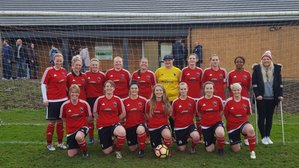 Hepworth travelled to York RI following seven weeks without playing and only being able to train a couple of times so were likely to be a little rusty in their performance and so they were though there were periods of play in which they dominated and played some impressive football. It was Hepworth who started the liveliest but their early domination of the ball did not lead to any real convincing threats on goal but only several long range efforts or weak shots that were dealt with easily by the York keeper. With approx 20 minutes gone it was York who turned the tide and pounced on a Hepworth mistake as a back pass to the keeper was miss kicked on the tricky surface and the ball spun and landed in the path of a York player who gratefully slotted the ball home against the run of play. This gave York the momentum they had been lacking and spurred them into life and the game became more open. York looking lively with their pacey striker who they pumped the ball forward to at every opportunity as Hepworth showed them far too much respect and gave them too much time. Hepworth huffed and puffed but their early dominance had evaporated and they found themselves harried and hounded and cracks began to appear. Going forward Hepworth were forced to shoot from distance and could not just get the York goal in their sights and trouble the keeper as often as they should have as York certainly didn't look convincing at the back.
On the half hour mark York doubled their lead following another Hepworth error as a misplaced pass was intercepted and away raced York to score and go into half time with a flattering 2- 0 lead. Turning around trailing Hepworth came out fighting and their pressure and sheer determination dragged them back into the game on 52 minutes when Sophie Walsh charged down a clearance and the ball fell into the path of Lucy Pickles who's anticipation and timed run saw her latch onto the loose ball and race down on goal. She calmly rounded the keeper and desperate defender to slot home to make it 2 - 1. Just 10 minutes later and from a Hepworth free kick the ball was lost cheaply with no real threat but a long punt sent the York striker clean through again and she raced clear and rounded Rebecca Harper in goal to extend the lead to 3 - 1. The game had a crazy period where either team could and possibly should have scored , York being extremely wasteful in front of goal and Hepworth, well just lacking that sharpness they have had previously and had Harper in goal to thank for pulling off several great saves. On 82 minutes Hepworth were caught napping again and with a quick break found themselves overrun and outnumbered as p[layers jogged back and they fell further behind after a 5 v 2 attack. With nothing to loose Hepworth through everything at York and had several great chances of their own and should have been level had they had been more clinical or more polished in front of goal. Captain Jo Forrest fired just wide on a couple of occasions before Renata Ferherova finished off the scoring after beating the offside trap and racing clear going round the keeper to score making the final score 4 - 2 to York.
Share via
FacebookTwitter
https://www.pitchero.com/clubs
Recent news