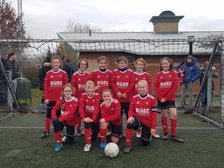 Who let the Hawks Out ? Who Who

Following on from last weeks great point which the hawks were a little disapointed with as they felt they deserved all three, they entertained Rocs Fc who had beaten them 7-2 in their first game of the season. Determined not to let that happen this time round the Hawks were eager to tear into the Rocs from the off. The early pressure was all from Hepworth as they pushed forward looking to open the scoring urged on by their fantastic parents stood behind the goal. They had Rocs pushed right back into their own area and in the 5th minute they breached the Rocs defence from a quick throw in from Leila Calcutt to Beth Canon, who's quick turn and shot through the crowd nestled in the bottom corner to a loud cheer by all the parents. The Hawks were really firing on all cylinders and were solid from back to front,Olivia Lear and Niamh Redfern who have formed a great partnership at the back and controlled virtually everything were working so well and hard and on the odd occassion they were beaten Imogen H - Smith was in superb form in goals. Her kicks were outstanding and releaved the pressure when Rocs finally had several attacks, but this team has a great work effort and they were in no mood to let this lead slip. Eva Robinson, Maisie Chamberlin and Leila Calcutt worked their socks off closing down and chasing everything and looking to feed the ball through to the lively Phoebe Sykes and Beth Cannon. Cannon having blocked aball and being winded was replaced by Pia Rhodes who was captain for the day. Connie Stratton also entered the game as a replacement for Maisie Chamberlin and was straight into the action the pint sized assasin feared no one no matter how big they were and was often found to be in the thick of things, as was Pia Rhodes who set up some great through balls on numerous occasions to her forwards.
Turning around a goal up and having been urged to keep up their hard work the Hawks had to dig in as Rocs went on the attack and used their subs to try grind Hepworth into the ground but these Hawks players are a gritty bunch and take a lot pressure and cope well with it. Hepworth dug in and soaked it up and looked to catch their opponents on the break which they did on several occasions forcing several corners and creating several good chances as Rocs defended their goal and were really lucky not to conceed a couple more goals. The game swung from end to end and both teams were hunting the next goal which would be crucial. On 27 minutes from a Rocs attack Hepworth won a throw and the ball reached Maisie Chamberlin who broke and raced from deep in her own half beating three or four defenders in her path before her cool finish put the Hawks 2 goals up. This instantly boosted their hopes and and despite their energy levels dropping they kept plugging away and working as a team. The scenes at the final whistle were awsome as each and every player celebrated following the sporting handshakes to the Rocs Fc players. How far this squad has come in such a short space of time ! a difficult job for the referee to choose a player of the match but that accolade was awarded to Leila calcutt who was one of many who deserved the award.
Share via
FacebookTwitter
https://www.pitchero.com/clubs
Recent news