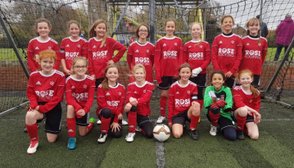 Hawks go down to strong Crompton

The Hawks went down by four goals to one against a very strong and dominant Crompton Rainbows who are a long established side. The hawks were caught napping after just 5 minutes as Crompton raced forward and after a goalmouth scramble slammed the ball home. With a changed side due top players not being available Hepworth were missing several key players but the goal seemed to awaken them. They tried to force their way back in to the match but on a new bigger pitch and with off side now in the game they struggled to adjust to Crompton's fast flowing football. On 15 minutes the Hawks were two goals down. they kept plugging away but found it hard to move the ball forward quick enough and were somewhat over run at times. They fell a further goal behind on 21 minutes from a corner, but managed to hold on till half time.
Almost straight after the re start Cromton broke free and scored a fourth goal, and it was beginning to look like one way traffic, but the team had listened to the words at half time and started to act on the words of advice. captain charlotte Patterson was leading her nteam weel encouraging everyone, the defence of Olivia Lear and Abigail Darwin were growing with confidence as was keeper Amelia Darwin who was now starting to relax and control her area better. The Midfield of Hannah Crowther, Romy Payton, Maisie Chamberlain and Mabel Green were all linking up well at times with striker Millie Bell and Emily Wilkinson who both worked tirelessly up and down the pitch. As had Imogen Hamilton Smith for long periods but she was often blocked when in a good position. The team grew stronger and started to get to grips with Crompton creating chances and forcing several corners. Their efforts paid of in the 30th minute as Emily Wilkinson was released by Millie Bell and she raced clear to open the scoring for Hepworth and grab a consolation goal to make the final score 4-1.
The referee's girl of the game award was awarded to Millie Bell who was outstanding and covered every inch of the pitch.
Share via
FacebookTwitter
https://www.pitchero.com/clubs
Recent news