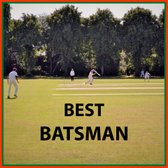 The results from the final poll are in. Thanks to everyone who got involved. There is more fun to come in various forms over the coming weeks!

This is tough. I never saw David Ottley, who was apparently a class act. I played a fair bit with Lawrie Wright but he was past his peak. At one point around 20 years ago, when Eric was on his massive accumulation of runs, he played a one off game for the 3s or 4s and scored a ton. He said to me afterwards (with a broad smile on his face) that when Eric gets a century to close on his record number, he likes to play and get one himself, just to annoy him a little.

Eric Riddle can’t be ignored for his huge weight of runs. If you want to understand the secret to his determination it may in part be explained by what he said to me once about 25 years ago: “Paul, I play every match as if it’s my last.”

If we ever play cricket again, and we ask this question again in five years time, Will Ray might be top of the list but for now, he’s not quite there.

My top three are Cliff Cavener, Steve Gale and Steve Cordingley. Trudge was at his peak when he was hit by injury problems and I think he was the best I’ve seen technically. A total run machine. Galey carried our batting on his own for a couple of seasons and always seemed to score runs when needed. Cliff was as good as any batsman in the County at his best but didn’t get the recognition. Perhaps they thought he was still a bowler.

Eric Riddle for pure weight of runs and Trudge and Rixon I loved watching bat. Steve Gale, Michael Bailey and Will Ray look class from the boundary but best for me is Cliff Cavener. He had shots for all occasions and luckily I got to watch from close range.

Honourable mentions to Steve Cordingley, Steve Gale and Michael Bailey, all great batsmen in their own right, also growing up as a teenager and playing in the same side as Lawrie Wright you could tell how good he would have been. But as more of a social member now who enjoys watching and having a beer, can honestly say the one I would watch every week is Will Ray, just a gun, pure and simple.

If Eric Riddle gave Roger the opportunity, then he would be! Eric for me personally, and it’s not only because I’ve played with him a lot but his record speaks volumes.

Eric is undoubtably the most productive. Steve Riddle, Trudge, Will Ray and Steve Gale were fantastic but Bails is the best I’ve seen.

Steve Cordingley for me.

Trudge all day. And night to be fair.

Will Ray for me.

Difficult call for me as I only saw Laurie Wright towards the end of his career. Apparently David Ottley could play a bit. Eric Riddle for his compiling of runs in his own style of play over many years. Steve Cordingley for his solid technique and clinically straight drives back past the bowler. Michael Bailey could demolish attacks at will but tended to shed the occasional tear on the pitch. Rob Carter for making me look good at the other end but his pull shot off a good length was worth the entrance money alone. Don’t forget his quickness between the wickets.

But if I was a betting man and needed to win money I would put it on this guy who could bat on all types of wickets in all situations against all attacks. It would be Steve Gale. Oh! Did I miss myself out!?

Agreed and concurred. Unfortunately we missed a chunk of his prime. I remember you two opening the batting on a Sunday. I think you had 2 when he had 50!

The best batsman on bad wickets was undoubtedly John Cundle.
Most classical bat - Lawrie Wright.
Best against short quick bowling - Nick Anderson.
Most stylish - Dave Ottley.
Hardest to get out if he wanted to stay in - Jim Riddle.
Most enjoyable to watch demolishing an attack - Michael Bailey and Steve Gale.
Cliff Cavener, Rob Carter, and Trudger my top 3 all round bats.

For me, over the years - David Ottley, Rob Carter, Steve Cordingley, Steve Gale, and Micheal Bailey.

All the names mentioned have been great batsman for the club over the years. For a couple of years in the early 2000s, Rob Carter and Cliff Cavener was as good as any but Steve Cordingley was the best I’ve seen. Technically unbelievable! Especially straight done the ground. If he had the determination he would had played professionally.

Cliff Cavener, Rob Carter and Ben Stewart all sit top of my mind - but agree with Scott re Steve Cordingley, and if he didn’t have jelly knees and would have been able to field - he could have made it professionally.

Throughout most of the early 70s, HCC had a number of excellent Minor County players operating at a higher level than us journeymen. I comment on:

1) The obdurate brave the now late Laurie Clough;
2) His club and County opening partner, Laurie Wright, who had a greater shot variety. I recall the seemingly effortless lofted on-drives particularly;
3) The ex-Middlesex staffer David Ottley was the most talented batsmen I saw in Hertford colours. He had a wide range of shots, plenty of time to play them, excellent running between wickets and cover fielding.

Over the years we were several times hammered by the two Lau(w)ries, (Clough and Wright) and John Cundle but I believe in sixty odd years watching Hertford batsmen, David Ottley was the best. Why? Class and elegance! In passing, in 1980 Robin Marques introduced a New Zealander, Keith McEwen by name, to play for the County as a pro for one season only. I saw him bat only once, but if he played for Hertford as well (as he might have?) he would have had my vote. Finally in more recent times, in talent and ability Steve Cordingley matched all those mentioned above – what a shame he gave up so young. Steve Gale of course also deserved consideration.

David Ottley is the best batsman I have ever seen play at Balls Park. David was a tall elegant right handed batsman who oozed class, he could have easily played First class cricket. He liked to have some throw-downs before going in to bat and I was often happy to oblige. He always played with a straight bat and played in the "V" such a lot. I have never seen a batsman play the cover drive and particularly the on drive with such ease, whilst keeping the ball on the deck. I really enjoyed watching him bat.

David Ottley - he had it all.