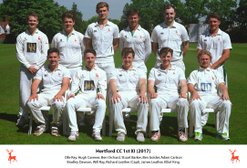 Hertford triumphant in play off against local rivals Hoddesdon

After a challenging season, in which they had mustered just 2 victories, Hertford had a final opportunity to retain the Premier Division status as they took on local rivals Hoddesdon in a promotion/relegation decider at Balls Park.

With heavy rain the previous day, the Balls Park wicket and outfield was in remarkably good condition and on winning the toss, Hertford captain Richard Leather chose to bat first. Hoddesdon were able to find some early swing and kept the Hertford pair of Will Ray and Ian Harris under control. Ray and Harris batted patiently, taking the score to 34 before Harris played a big shot out of frustration at Kevin Walls, and in dragging his back foot the slightest margin, gave the Hoddesdon keeper Grier all the opportunity he required to remove the bails and dismiss Harris for 6.

Having seen off the opening spell from Davies, Ray and his new partner King, were able to build momentum. Even so, a slowish wicket and an even slower outfield made scoring difficult and boundaries were hard to come by. As the mid-innings drinks break approached Ray passed 50 and Hertford were gradually building the kind of platform from which to take advantage in the latter stages. Just as they looked to take the attack to Hoddesdon, they were pegged back, with the impressive Thorne removing first King and then Richard Leather, as both were bowled chopping the ball on to their stumps. When James Leather was trapped LBW by a Walters delivery which skidded low from round the wicket, Hertford were in danger of having wasted their early good work.

Jamie Riddle, fresh off a prolific season captaining Hertford's second XI, came to the crease seeking to carry his good form into the high-pressure situation. For the next few overs, Ray and Riddle rebuilt looking to get Hertford into a position to effectively use the final 10 overs. Will Ray's excellent innings finally came to an end when he was trapped LBW by Thorne for 77, Hertford were 155-5, but had plenty of batting to come. Joined by the energetic Cowell, Riddle took control and started to pick the scoring rate up. A quick partnership of 40 took Hertford to 195-6 when Cowell was caught by Brown, running in from the square leg boundary. Brown may have been regretting taking the catch, as when he returned to bowl a couple of overs later, the new batsman Slater took and immediate liking, hitting a couple of powerful strokes, including a large 6 into the carpark. This was a decisive over, with the momentum fully turning towards Hertford. Riddle and Slater took Hertford to an impressive 242-6, Riddle making an excellent 53* and Slater an important 24*.

At the halfway stage it was Hertford who held a slight advantage, with runs on the board a precious commodity in such a pressurised game. With early wickets the order of the day, James Leather duly obliged removing left handed Ashley Leat for 0 in the first over. This brought the key Hoddesdon pairing of Rob Walters and Sam Davis and for a few overs they made Hertford sweat as they punished some wayward bowling from Slater. Slater, undeterred, then produced his second moment of magic for the day, as he bowled Davis with a brilliant delivery clipped the top of off stump. Hertford were buoyed by this dismissal and started to pile the pressure on the incoming Hoddesdon batsman Clarke. Jon Ryan entered the fray and looked in complete control from his first over, proving extremely difficult to score off. Walters was now being kept off strike for large periods, and although he did not become frustrated the pressure was building further. Ryan then bowled Clarke with another fantastic delivery to reduce Hoddesdon to 61-3. Hertford seized the initiative once again as Folland removed the next man Sturdy LBW in his first over and Achillea was then stumped by Cowell of the bowling of Ryan to leave Hoddesdon 72-5.

With Walters still at the crease Hertford were aware that this game was far from won, and had to endure a quiet period, where Hoddesdon worked hard to get themselves back into the game. As the game was building to a crescendo, something had to give, and it did, Higgs called Walters through for a quick single, having chipped the ball just out of the reach of bowler Ryan. James Leather swooped at mid-off and threw on the run to Cowell, narrowly beating Walters and crucially removing him for a well made 68. Hertford now sensed the opportunity to finish Hoddesdon off. Ryan first bowled Brown for 1, finishing an exceptional spell of bowling with figures of 10-1-31-3. Ruskin joined the party, beating the defences of first the obdurate Higgs and then Thorne to leave Hertford within 1 wicket of victory. Despite a dropped catch and a couple of adventurous strokes from Grier, Hertford held their nerve as the game was wrapped up with another run-out and Hertford celebrated a fantastic victory and complete team performance.

At the end of a challenging season, Hertford saved their best for last and gave plenty of reasons to be optimistic for next season. With so much change over the last winter, Hertford can reflect that in the circumstances they achieved their ultimate objective, and that the years experience for a young side, will hold them in much better stead for the 2018 season.