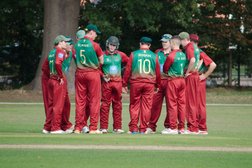 Hertford through to T20 Finals Day!

Hemel Hempstead CC, alongside some highly interchangeable weather, provided the backdrop for 4 teams to do battle in the group stage of the Herts County 20/20 Competition with the aim to reach the illustrious finals day on Sunday the 14th July.

The first game was Hertford vs. Leverstock Green and captain Ruskin elected to bowl first on a green pitch and was immediately rewarded with an early wicket courtesy of J. Leather – however following that wicket opener Koch got to work and began to set a platform with which Leverstock could launch later in the innings. Hertford continued to take regular wickets despite a few profitable partnerships – these wickets were mainly the product of some tight bowling from the Hertford spinners; Lawrance, Ruskin and Underdown constantly provided excellent control and subtle variations that brought all three bowlers 2 wickets apiece. It also meant that when the seamers returned at the end of the innings Leverstock had to rely on their lower order for an elaborate finish.

This finish never came and Hertford were able to restrict Leverstock to 122-8 from their 20 overs thanks mainly to the impressive efforts of the three spinners.

122 appeared to be a score that was under-par on first glance – however, after Hertford had slumped to 54-5 in reply it suddenly looked like a very tall order. Ray and Pavey were able to do a good job of repairing the innings and began to look like they might be able to put Hertford in the position to win – however, Pavey called Ray through for a tight single and a direct hit meant Ray was left short of his ground falling for a well-made 33 with Hertford on 90. Following this, Pavey found his timing and was able to push the score on in quick time alongside new partner Ruskin, a flourish of boundaries and some good running meant that Hertford were able to canter home with 9 balls still remaining!

After watching Old Owens collapse against Hemel in the other ‘semi-final’ Hertford then faced the hosts in an 18 over-a-side finale to determine who would go through to finals day. Hemel opted to bat first and after a slow start against some good seam bowling from Leather, Knight and Slater, the Hemel openers, aided by some dropped catches and near misses were suddenly able to open their shoulders and began to bludgeon boundaries at will. Hemel were 100-0 and on course for a huge score, when all of a sudden two quick wickets allowed Hertford to turn the screw.

The breakthroughs were again down to some fine spin bowling from Underdown and Ruskin with 1 and 2 wickets respectively, the pressure was then applied on the new batsman just as they were trying to make quick runs. These fine spells, alongside some excellent death bowling from J. Leather meant that Hemel could only add another 27 to the score despite their excellent start. This left Hertford a tricky but attainable target of 127 from 18 overs.

With Barker as the aggressor, the Hertford openers started well by adding 32 for the first wicket until Leather departed. Following a short partnership between Barker and Ray, the latter departed and with the run rate creeping up Riddle joined Barker in the middle and the pair took the attack to Hemel. Both cleared the boundary with regularity and this gave Hertford some much needed impetus. Just when it looked like the chase might be coming together Barker departed for a fluent 32 and after a belligerent 22, Riddle followed as well. Hemel then turned the screw and when Slater fell victim to the rising run-rate Hertford were suddenly 83-5 needing 8-an-over to complete the win.

There was no time for consolidation, Lawrance and new partner Pavey threw caution to the wind for a few overs but it simple wasn’t enough, Hertford needed a big over. Luckily one of the Hemel bowlers experienced a rain-induced meltdown and bowled 3 head-high no balls in succession –Lawrance dispatched one free-hit for 4 and the next for 6, with 18 coming from that over Hertford were now well back in the game!

Lawrance decided to continue his attack on the Hemel bowling and get the game finished early, however Kanade was on the money with a yorker and Lawrance was out for a brilliant, match-saving 24. This left 11 runs from 10 balls, Pavey provided a boundary but then ran himself out going back for a second run leaving Hertford needing 5 from the final over. New-boy Lyte got off the mark and left his captain to finish off the game – Ruskin obliged and hit a 4 so that Hertford won with 3 balls to spare!