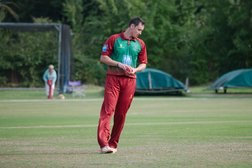 After a week of intermittent but torrential showers, Scott Ruskin won the toss and elected to field first on what appeared to be bowler friendly conditions.

Ruskin’s decision to field appeared to be the right one when opening bowlers James Leather and Andrew Knight started well against Pat Scott and ex-Hertford captain, now Potters Bar captain, Steve Gale. Knight in particular found exceptional rhythm and was rewarded with the key scalp of Gale for 10, bowled by a leg stump yorker.

With the score at 22-1, Pat Scott was joined by his older brother James and the pair set about steadily building a partnership, albeit struggling against the probing Hertford attack. Knight bowled his allotted 10 overs straight through, finishing with impressive figures of 10 overs, 1 wicket for 26 runs.

Potters Bar continued to amble along until the game was turned strongly in Hertford’s favour by Rob Slater who tore through the PB top order. Slater's first victim was Pat Scott (39) who was well caught by Ruskin at backward point. Next to fall, shortly after the drinks break, was Essex-pro Rishi Patel (1) who nicked behind to Ben Cowell before new recruit, Kazi Hasibul Hoq, was run out backing up at the non-strikers end. When James Scott (36) was trapped LBW, Bar had been reduced from 90-1 to 97-5.

Hertford were in no mood to let up the pressure which was maintained by impressive teenage debutant, Johnny Underdown, who picked up his first 1st XI league wicket when he had Luke Chapman caught behind for 6. Underdown, who showed great composure when the batsmen tried to take the attack to him, went on to pick up 2 more important wickets. Only a last ditch 21 from Brad Sayers could drag up Potters Bar up to 145 from 40.4 overs. Cap-less and sunglasses-less George Pavey tried his best to prolong the innings by mis-judging a dolly at mid-off, but Scott Ruskin was having none of it when he picked up the final wicket a few overs later.

Hertford were fully aware that the chase wouldn't be an easy one on a slow wicket with the ball not coming on to the bat. The reply was ticking along until Hertford opener Will Ray (6) flicked PB seamer Jigar Mehta straight to square leg. Soon after, George Pavey (2) was caught behind and then Ben Cowell was bowled by a beauty from Mehta who had taken the first 3 wickets and reduced Hertford to 23-3. Hertford were teetering when new man Max Lawrence joined Stuart Barker and maturely set about rebuilding the innings while calming the frenetic atmosphere.

With the rot stopped (for now), Lawrence and Barker gradually increasing the tempo of their batting until Lawrence was trapped LBW by Brad Sayers for a well made 25. Barker had seen wickets tumble up the other end but continued his fine pre-season form until he was caught top edging a slog sweep for another nicely constructed innings of 27 in difficult conditions.

When Elliot King was bowled for 4, the game was once again in the balance until bowling-hero Slater joined James Leather in the middle. Leather took the initiative with several well-selected, well-executed boundaries, the pick of which was a lofted drive over mid-off for 6. Slater provided able support for Leather, scoring freely and putting away the bad ball. While the required run rate was never a serious issue, the wickets column was, and Hertford’s all-rounders batted with great skill and application to calm any dressing room nerves. Slater, who had a fantastic game, fittingly closed the game out with a huge 6 to take Hertford to the total with 4 wickets in hand.

The first league game of the season was hard-fought between two good young sides aiming to improve of their 2018 league positions. As it should be, both teams enjoyed a drink together on the outfield following the games conclusion.

Next Saturday Hertford hope to continue their winning start to the season at home to West Herts.