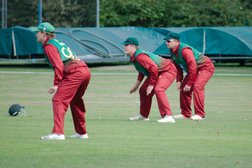 After last week’s impressive opening day win over Potters Bar, Hertford went into the West Herts fixture full of confidence and keen to make it 2 wins from 2.

Hertford’s confidence was high for several reasons; one, they were playing at home; two, their opponent’s had lost their opening game; and three, West Herts weren’t able to call upon their talismanic opening bowler, Will Jones, because he was suffering from a knee injury, but would still play as a batsman. Despite his injury, it would be Jones who would be the deciding factor in a cagey game, this time with bat and not ball.

Will Jones is one of the league’s finest seam bowlers and also captain of West Herts; and it was he who won the toss and elected to field first on a green Hertford track. It wasn’t long before West Herts got the break-through when Stuart Barker was well caught at extra-cover off the bowling of Bill Gage for 9. Gage would then strike again twice in quick succession when George Pavey was caught in the slips, before Ben Cowell was adjudged LBW, leaving Hertford in strife at 22-3, 1 run less than they had managed the week before against Potters Bar (23-3). Through a combination of good bowling and poor shot selection, Hertford’s top order had once again failed to set any kind of platform for the middle-lower order.

Hertford’s no. 5 was Max Lawrence and he was yet again facing the task of re-building Hertford’s innings, this time with Will Ray. A re-build was beginning to look likely as Lawrence pounced on some rare loose deliveries from Gage, only to then cut a short and wide ball straight to backward point. When Will Ray was caught behind for 13 soon after, Hertford were in desperate trouble at 39-5.

The 2 new batsmen were Elliot King and James Leather, the latter of which was in good form the preceding week against Potters Bar. King and Leather batted carefully for a period of time, rotating the strike without taking any undue risks until, with the score on 66, Leather was extremely well caught and bowled when he powerfully struck the ball back at Woosley. West Herts had been fantastic in the field, clinging on well to several half chances.

King’s was now joined by Rob Slater and a partnership was once again taking shape until shortly after drinks when King (23) drove spin bowler Matthew Smith to extra-cover. The remaining lower order batsmen were all able to contribute which put the top order’s efforts into perspective. The highlight of Hertford’s disappointing batting display was the 9th wicket partnership between Scott Ruskin and Johnny Underdown. Both batsmen exhibited the discipline required in the conditions. 15 year old Underdown, batting at number 10, top scored with a frankly quite brilliant 26, putting the senior player’s efforts to shame.

Hertford were eventually bowled out for 137 from 49 overs, knowing full well that it would take a stunning bowling display to turn the fixture in their favour. Bill Gage was the pick of the West Hert’s bowlers with figures of 9 overs, 3 maidens, 4 wickets for 23 runs. He had more than filled the considerable-sized bowling boots of his stricken-skipper, Will Jones.

Needing early wickets, Hertford once again looked to their in-form, nicely-complimented opening seam attack of Andrew Knight and James Leather. Knight was once again into the same rhythm which he’d found against Potters Bar, but it was Leather who would get the initial breakthrough when his yorker pinned Simon Walker in-front for 14. Shortly after, with the score on 26, Knight picked up the 2nd victim of the innings when Alastair Lewis was out LBW for 4. In the meantime, Jones had promoted the experienced Ian Gurney to no. 3 to nullify the increasingly threatening Hertford seam attack. Gurney found a recipe for success, blocking the good balls and hitting anything remotely loose the boundary. However, his batting partner Richard Mason never quite found the same formula and was eventually bowled for 7, leaving the game well-balanced with West Herts on 47-3 and Hertford in the ascendency.

The next partnership between Gurney and Will Jones would prove to be the pivotal one in the game. Jones, who is a powerful left-handed batsman, was absolutely ruthless on anything loose and gave Hertford’s bowlers no margin for error. While Johnny Underdown gave Gurney simply nothing to score off of at one end, Jones was brutal at the other, dispatching numerous boundaries on his way to the game’s only half century. Gurney and Jones coupled two very different batting styles and this frustrated and unsettled Hertford’s bowlers. When Gurney was dismissed by the returning James Leather for 33 from 71 balls, the game was all but concluded with West Herts only needing 31 for victory.

Still, this closely-knit Hertford side have a ‘never-say-die’ attitude and harboured aspirations of mounting an unlikely comeback. Jones however resisted Hertford’s efforts, taking the score to 134 until he was caught behind off of Leather for 57 from 56 balls. Out of all those who had tried, Jones was the only batsman to find any kind of timing in the conditions. West Herts’ no. 6 and 7 closed the game out, taking them past the set total with 5 wickets and 13 overs in hand. It was a comprehensive victory for West Herts, in the end.

Hertford’s bowlers did themselves proud again. Leather finished with 3-43; Knight with 2-32 from 10 overs; and Underdown continued his fine start to this 1st XI career with figures of 10 overs, 5 maidens, 0 wickets for 18 runs.

Hertford will be looking to get back to winning ways when they face North Mymms next weekend, once again at Balls Park.