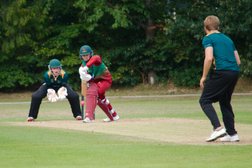 Hertford 1st XI faced a strong but under-performing North Mymms side in game 3 of the 2019 season. After last week’s disappointing performance against a weakened West Herts side, Hertford were looking to bounce back against North Mymms who frequently co

The toss was won by Mymms’ skipper Nesan Jayaratnam who elected to bat first on a firm green track under blue skies. Opening batsmen Hamza Qayyum and Hamza Ahmed were quickly into their stride, taking the attack to Hertford’s bowlers by capitalising on anything loose on a pitch that offered good value for shots.

It took Hertford a while to get the initial breakthrough so they were relieved when the reliable Andrew Knight dismissed Ahmed for 29 with the score on 73. With a solid platform established, Mymms’ captain Jayaratnam joined Qayyum in the middle and the pair batted steadily and sensibly with the latter taking his score past 50. With the total just shy of 100, Knight picked up his 2nd victim when he had Qayyum well-caught by Elliot King in the slips for a run-a-ball 57 including 9 fours and 2 sixes.

While North Mymms had dominated the innings until now, the momentum was soon to turn in Hertford’s favour as they were able to exert control through accurate spin bowling and energetic fielding. While the 3rd and 4th wicket partnerships cost Hertford 108 runs in total, Mymms were never able to capitalise on their strong start as Hertford kept the run rate in check. Credit was due to “spin-twins” Johnny Underdown and Scott Ruskin who bowled admirably against two quality ex-Hertfordshire captains, Jayaratnam and Andy Lewis.

If the middle period of the innings so far had been Hertford controlling proceedings, what followed was total dominance from the fielding side. Mymms would have had their sights set on 300 but Hertford quite brilliantly closed the innings out through the bowling of Rob Slater, Max Lawrance and James Leather. Slater was particularly impressive, bowling the last 5 overs from his end and finishing with figures of 5 overs, 3 wickets for 21 runs. This was a great achievement against good batsman who had their sights set on a short boundary to one side. Mymms finished their innings with a total that seemed under-par in the circumstances - 240-7. On top of Slater’s 3 wickets, Lawrance picked up 2-49 from his 10, and Knight 2-48.

With end of innings momentum on their side, Hertford’s opening batsmen looked to emulate their opposing numbers but once again they were only able to contribute meagre scores in their team’s pursuit of 241. Will Ray (15) was the 1st victim when he was trapped LBW to Jason Bryceland with the score on 37, then Stuart Barker departed soon after for 19. The returning Jamie Riddle (14) was then adjudged stumped before Max Lawrance was caught for 8. At 75-4, 240 looked a long way off.

Hertford looked to their vice-captain Ben Cowell to play an innings of substance and alongside Elliot King it looked as if he would do so until King played a nice-looking lofted extra cover drive, only to find the only man on the cover boundary. With the score on 104-5, still 137 shy of their target, Hertford could take confidence in that they had strength in depth in their batting. When Cowell departed for a well-made 31 from 49 balls, James Leather and Rob Slater took the reins and had almost put on 50 between them when Leather was caught of the bowling of Kent-pro Imran Qayyum for an innings-high score of 46 from just 33 balls (6 fours and 2 sixes).

When Slater was run-out by Andy Lewis for 15 with the score on 184, Hertford now turned their hopes to the most junior and most senior members of their side, Johnny Underdown and Scott Ruskin. What followed was a nerve-wracking sequence of cricket for the considerable crowd who had turned out to watch an entertaining game.

Ruskin’s experience coupled with Underdown’s fearless approach seemed to be guiding Hertford to an unlikely victory. While Ruskin played risk-free cricket; Underdown was aggressive against a quality Mymms spin attack. Just as Mymms were starting the fear the worst, it seemed the hard-work Hertford’s no. 9 and 10 had been unravelled when Underdown struck a high ball out towards cow-corner… Out. Caught. Wait a minute. Not so fast. An ordinary game was about to experience its first moment of controversy.

The eagle-eyed square leg umpire had spotted that on its way into the fielders hands, the ball at struck an over-hanging tree branch on its way down. After several minutes delay and heated on-field debate, the umpire’s came to the conclusion that not only was it not out, Hertford would be rewarded with 6 runs. Mymms’ short-lived elation quickly turned feelings of unfair treatment, whereas Hertford were beginning to feel like the cricketing-Gods were looking down favourably on them.

Unfortunately for the local side, it just wasn’t meant to be on this occasion. Johnny Underdown was caught in the outfield soon after for a brilliant 25 and then, requiring 8 to win from the last over, Hertford’s skipper was bolwed with Jhala for a very well-made 15. Hertford had fallen just 7 runs short of their target, bowled out for 233 in 49.1 overs.

While Hertford were ultimately disappointed to lose given they had chances to win the game, they will take comfort from the fact that they were able show fight to turn the game in their favour. It is this never-say-die attitude that will surely stand Hertford in good stead for the remainder of the season. Next week Hertford travel to in-form Harpenden in game 4.