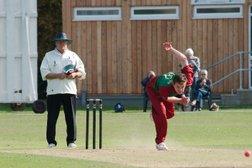 After heavy rains in the week, all hands were on-deck before the game in order to get the saturated outfield in shape for a 12 noon start. Not even the extensive efforts of ground staff and players were enough to recover the pitch in time so a delayed start was agreed at the toss which Totteridge won, electing to field first.

Before a ball had been bowled, Totteridge made it clear they were no longer happy with the state of the outfield which was deemed fine at the toss, and so the players made their way back to the pavilion again. With 20 overs lost from both innings, the umpires and captains eventually agreed to a 3pm start, 30 overs per side.

On a bowler-friendly wicket that was damp in places, Hertford’s Will Ray and Jamie Riddle got their side off to a flyer by exploiting Totteridge’s wayward seamers. Riddle was at his explosive best through the leg side – at one stage striking a huge 6 over the square leg boundary off of tall seamer, Josh Lewis.

As the overs ticked by, the opening partnership began to dominate Totteridge with Ray busy and Riddle ruthless. A huge 1st innings score was in the offing as Hertford reached 80-0 in just 12 overs. Soon after passing his maiden 1st XI 50 in the 2019 season, Riddle perished when he struck a short ball from Shaun O' Brien to the man at the deep mid-wicket boundary. While the dismissal was unfortunate, the 1st wicket partnership (worth 86) had for the first time this year given the middle order a solid platform. Hertford’s 3 and 4 however fell in quick succession when George Pavey was bowled for nought before Adam Carlson, fresh off the back of a league 50, was caught in the covers off of O' Brien for 1.

At risk of failing to capitalise on a fine start, Will Ray and Ben Cowell set about rotating the strike against a bowling attack which featured IPL pro, Iresh Saxena, and Northants left-arm spinner, Graeme White. This was a difficult phase for Hertford’s batsmen who contemplated what was a good score in the circumstances. How many would they need to put Totteridge’s star-studded batting lineup under pressure? Hertford’s batsmen perhaps never answered this question and their disjointed approach led to several dismissals. While Cowell was caught at long off for 13 to leave Hertford 125-4, Ray remained defiant at the other end and soon passed 50 following his ton the week before. Soon after, Ray hit a short slower ball from O' Brien to the cow corner fieldsmen. Ray and Riddle posted 52 each and both had perished in similar fashion to the same bowler.

At 132-5, Hertford now looked to their lower order to get them past 170 which they had now deemed to be about par in the conditions. James Leather fell soon after Ray for 6, but a useful partnership between Elliot King (14) and Max Lawrance (15) elevated Hertford to a competitive 168 all out from 29.5 overs – would they regret leaving 1 ball spare?

Hertford knew their bowling and fielding would have to be immaculate if they were to stand any chance of restricting a side littered with current and ex-pros needing under 6 runs per over. It was therefore disappointing when the first few overs leaked runs before Jonathan Miles was dropped on the boundary. As they are accustomed to doing, this Hertford side found a way to assert themselves on the game and this was inspired by seamer James Leather who rushed through the Totteridge top-order. Skipper Ben Howgego was first to go when he played-on; Shaun O' Brien then nicked to King at first slip; and then Steve Selwood followed his captain by also chopping on to his own stumps. Leather’s vital 3 wicket burst had reduced Totteridge from 26-0 to 40-3 in the blink of an eye.

Miles, fortunate at this stage to survive not just 1 but 2 reprieves, was then joined by Graeme White who offered much-needed class and temperament to the Totteridge innings. He and Miles steadily accumulated but while the partnership developed, scoring never exceeded the required run-rate and Hertford hung in there knowing full well that wicket would bring them back in to contention.

While Hertford’s catching was poor (4 catchable chances went down in total), their bowling and ground-fielding was anything but. Jonny Underdown once again bowled commendably with figures of 31-0 from his allotted 6 overs, while Knight and Lawrance also restricted any free scoring. Pressure was building after a couple of particularly tight overs when Miles imploded - driving the ball to the sliding Jamie Riddle who calmly ran out White who had been ‘yes-no’d’ by his partner. Perhaps riddled by the guilt of his run-out mistake, Miles then lashed out against the line to Lawrance, only to top edge a catch to wicket-keeper Ben Cowell who took control of the high catch.

At 145-5 and still needing 6 runs per over, the game returned to the balance and it would be won by the side who best held their nerve. This is a situation which Hertford thrive in and they were inspired to a fantastic victory by 3 bowlers in particular. James Leather was the key protagonist – he returned to bowl his 6th and final over which conceded only a couple of runs and finished with match-winning figures of 6 overs, 3-27. The 2nd was Adam Carlson whose leg breaks had been introduced to spin the ball away from the short boundary which the powerful Simon Webster was aiming towards. Carlson’s short 2-over spell was also match-changing in that he bowled the 27th and 29th overs and only conceded 7 runs. The final man deserving immense credit for the win was skipper Scott Ruskin who bowled the final over when Totteridge required 8 runs for victory. Coupling decades of experience with his unwavering nerve, Ruskin delivered 6 fast yorkers to Webster who could only collect 5 runs in total. Hertford were jubilant following Pavey’s last ball run out which left Totteridge 2 runs short of their 168 target. Totteridge are a side who Hertford are not used to beating so the victory tasted that bit sweeter for a young side which featured 8 players who had come through the youth ranks at the club.

With 3 wins from their first 5 fixtures, Hertford next week travel to in-form Luton Town & Indians (4 from 5) in the first longer format game of the season.