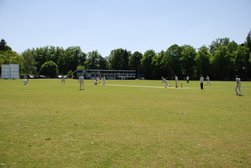 After a week of mixed weather, Hertford skipper Scott Ruskin elected to bat first on a wicket that was firm but green. This week, Will Ray opened the batting alongside George Pavey - his 3rd different opening partner of the season. Ray and Pavey started well until the latter (6) was out LBW to Australian left arm spinner Matthew Grant who was introduced in the 6th over.

With the score on 23-1, Max Lawrance joined Ray and the pair had moved the score to 59 when Lawrance (14) guided an easy chance to Owais Shah at first slip. This bought Adam Carlson in at number 4 and he and Ray batted patiently, particularly so against the probing spin of Grant. Hertford’s short term plan of reaching the lunch break 2 down was looking likely when Ray passed 50, only to fall seconds later when he missed a sweep off of Jamie Southgate’s off-spin bowling.

If Ray’s dismissal was untimely, the calamitous run-out which followed 2 runs later was even more so. Attempting a 2nd run on an overthrow, new batsman Cowell hesitated and then failed to make his ground at the bowlers end. This meant that from a position of strength on 94-2, Hertford went into lunch 100-4 following 2 needless dismissals on a track that, unlike the Luton game, favoured the batsmen.

After the lunch break, Hertford looked to Carlson to anchor their innings towards a total that would challenge WGC’s hugely talented batting line-up. Carlson and King had taken the score to 124 when the former was caught behind off the seam bowling of David O’Sullivan who had probed on a good length all afternoon; eventually getting his just rewards. Carlson’s knock of 43 from 74 balls was well put together but like Ray’s, was not enough in the circumstances.

When King was bowled 2 runs later for 6, even passing 150 on a good batting wicket looked improbable. Cameos from Ruskin (15) and Underdown (9), however, were enough to pass the ‘bear minimum’ milestone and Hertford were eventually dismissed for a disappointing 159 in 54 overs.

Despite feelings of what could have been from 94-2, Hertford set about their bowling reply knowing full well that WGC’s batsmen would still have jitters following Hertford’s recent grip on the contest. If any nerves were there, Hertford’s electrifying start looked to exploit them with James Leather beating the bat of ex-England star Shah on multiple occasions in the1st over.

At the other end, Andrew Knight firstly had a huge caught behind appeal against Shah turned down, and then 1 ball later had the same batsman fortuitously survive a miscued drive which landed just over cover’s head. This is a game of fine margins though; having weathered the early Leather/Knight storm, Shah then began to exhibit the type of stroke-play he is so well renowned for. Hertford would be left to lament their early bad luck. Shah and Louis Champion from then on gave Hertford’s bowlers nothing and the game had an air of inevitability to it.

Hertford, though, were in no mood to roll over completely and their efforts were led by 15 year old debutant Dan Orchard who bowled beautifully against two set batsmen. After Ruskin had Champion well caught by Carlson for 49, Hertford were offered a glimmer of hope when Shah mistimed Orchard to the same catcher on the boundary who unfortunately put this chance down. What a great first 1st team wicket that would have been for Orchard…

In truth, Hertford’s total of 159 was never enough for their bowlers to defend. Shah (73* from111) and Dan Blacktopp (33* from 56) knocked off the remaining runs without too much bother on a flat track. Hertford’s two 15 year-old bowlers, Orchard and Underdown, finished with commendable figures of 7 overs, 0-28 and 5 overs, 0-10, respectively.

Next week Hertford travel to league-leaders Radlett in what promises to be another difficult fixture.