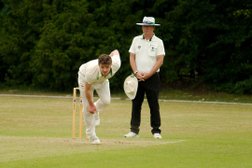 At the halfway stage of the season, Hertford 1st XI welcomed Potters Bar to Balls Park on what was a mild and overcast July afternoon.

Scott Ruskin won the toss and elected to bat first following Hertford’s impressive batting display the week before. From the outset, though, it was clear that this would not be another 300+ wicket, particularly when the strength of Bar’s bowling attack was taken into account.

This week Hertford were pleased to welcome back Richard Leather following his recovery from a pre-season knee op. Leather rekindled his partnership with Will Ray at the top of the batting order. When the score was on 20 runs, Jigar Mehta squeezed a full ball in between Leather’s bat and pad, dismissing him for 8 on his return to the 1s. This bought Ruskin to the crease who was soon after dismissed for 1 when he was bowled by Teddy Duke.

In at 4 was Adam Carlson who joined Ray at a time when Mehta – who was into a metronomic rhythm, was accompanied by Middlesex youngster, Thilan Walallawita. What followed was a slow-scoring, cagey period of cricket as the ball swung and the bowling accuracy improved. When the ball wasn’t beating the bat, it was either being blocked or pushed for singles. The run-rate dropped to a measly 2 runs per over and Bar tightened their vice-like grip over Hertford, excluding one occasion when Ray whipped Mehta off his legs for an unlikely 6.

As Hertford approached the lunch break, Walallawita picked up his first wicket of the day when he beautifully bowled Carlson through the gate for 13. This bought Cowell to the crease who calmly took Hertford to lunch 3 down with just over 70 on the board. While Bar had full control over Hertford’s scoring rate, the locals took comfort knowing that they still had 7 wickets in hand.

The post-lunch period was, however, a disaster for Hertford as they lost their vice-captain, Cowell, minutes after the restart. Then, shortly after passing 50 for the fifth time this year, Ray was caught and bowled by Walallawita for 57. The crumble was not yet complete, though, as King was caught behind shortly after being dropped. James Leather (4) completed the collapse when he was also caught and bowled by Walallawita who now had a well-deserved 5-wicket haul. At 91-7, Hertford were staring down the barrel of another limp batting display until Pavey was joined by Tom Orchard. This pair were pleased to see the back of Walallawita who finished with astonishing figures of 20 overs, 7 maidens, 5-28.

While Pavey was circumspect at the start of his innings, he suddenly burst into action in the final 10 overs with counter-attacking strokes against Luke Chapman, Paul McGee, and the returning Jigar Mehta. Together, Pavey and Orchard almost doubled Hertford’s score in the final 12 overs, dragging them up from 91-7 after 48 to 163 after 60. This continued Pavey’s season renaissance in the middle-order while Orchard played several eye-catching shots - the pick of which was a straight shot into the sightscreens for 6. Pavey made 41, sacrificing his wicket on the last ball of the innings, while Orchard finished 28* off of 40 balls. With 163 on the board, Hertford felt like while they were 50/60 below-par, they were at least in with a shout of causing an unlikely upset against the league’s 3rd placed side.

In pursuit of crucial early wickets, Ruskin set particularly aggressive, unusual field positions in an attempt to unnerve Steve Gale and his batting partner, Charlie Scott – another Middlesex youngster. James Leather and Dan Orchard charged in with gusto and regularly caused Bar’s opener’s problems, but they were able to score freely with vast spaces in the outfield. The score had reached 37 when Leather had Scott well-caught by 1 of 2 gully fielders. Then, with the score on 63, Dan Orchard picked up his first 1st XI wicket when he bowled ex-Hertford Skipper, Steve Gale, for 32. When Rehan Hasan was caught behind for 21 from Johnny Underdown’s first ball, Hertford sensed an opportunity with over 70 still required.

This hope was, however, short lived when Patrick Scott got into his work from no. 5. Scott was busy from ball 1, working the singles nicely while dismissing anything loose to the boundary. He and the more circumspect Wijesuriya negotiated the remaining runs rather easily in the end and gave Hertford’s batsmen a lesson in facing spin. Bar eventually chased Hertford’s total 3 down with almost 29 overs in the bank. Scott finished on 48* from 32 balls while Wijesuriya made 46*. Dan Orchard was the pick of Hertford’s bowlers, finishing with figures of 1-28 from 7 overs. Well bowled.

Next week Hertford travel to 2nd bottom side West Herts in another vital fixture.