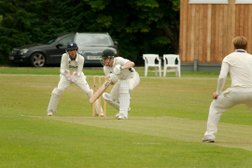 In week 11, Hertford faced West Herts in Watford after torrential rain the day before. The rains were, however, not enough to delay the game which got underway at the scheduled 11am start time; West Herts batting first. This week Hertford used a differ

This week Hertford used a different opening attack of Andrew Knight and Rob Slater (with James Leather away), and the former embarked on a fantastic spell of bowling which was unerring in line and length throughout. After a steady start, West Herts were reduced from 40-0 to 41-2 by Knight who extracted extravagant bounce from the pitch to dismiss Simon Walker (21) and Alastair Lewis (14). Then, soon after the score passed 50, Knight was able to claim his 3rd victim when he removed Matthew Smith for 8. At this stage it looked like a rampant Hertford, led by Knight, would steamroll West Herts. Enter Will Jones and Pakistani overseas, Jaahid Ali – a partnership which was always going to be the crucial one to break.

Jones and Ali took the approach of negating the threatening Knight while attacking Hertford’s young spinners. Ali was the aggressor, taking the attack to Underdown who bowled nicely but was never allowed to settle on a length with Ali down the track to most deliveries. The middle overs were a masterclass in batting in difficult conditions which were becoming easier as the ball softened. When Knight finished his remarkable spell on 20 overs, 8 maidens, 3-27, West Herts looked to put their foot down to post a huge first innings score.

In truth, Hertford’s bowlers had done well to restrict the scoring rate to below 4 for most of the innings, thanks mainly to Knight, and this meant West Herts had to attack earlier in the game than they perhaps would have. This led to the demise of Will Jones soon after he had passed 50, bowled by Hertford’s skipper, Scott Ruskin. This ended a 4th wicket partnership of 131 which had put West Herts in control. With Jones gone, Hertford had opened up an end but the impressive Ali continued to dominate with several lusty 6s mixed in with some well-run 2s. With Hertford being run ragged and Ali passing his 100, an unreachable first innings score looked likely but Hertford managed to stay in the game in the final few overs through some good bowling by Ruskin, coupled with some nice work in the field (2 run outs). This meant West Herts finished their 60 overs on 252-7; Ali making up the bulk of the runs with his 118. Along with Knight, who put in his best display of the season, Ruskin finished with 2-54 from his 10.

If chasing 252 in testing batting conditions didn’t sound difficult enough, Hertford would have to face up to Will Jones who is one of the finest seamers in the league. Add in that Jones was bowling in conditions that suited him down to the ground, and the chase looked improbable. This was how it unfolded, at least to begin with, when Jamie Riddle was caught in the slips off of Jones for 8. Then, with the score on 31, Richard Leather was dismissed in similar fashion to the same bowler.

Herford managed to get through to tea without further damage thanks to a brief partnership between Will Ray and Ben Cowell. At 55-2 after the break, Hertford needed their own Ali-Jones partnership if they were to have any hope in chasing the 253 required. That partnership wouldn’t come by this pair, as Ray became Jones’ 3rd victim when he was given out LBW for 23. Next was Tom Orchard who batted nicely for 10 but was also given out LBW when he shouldered arms to Ian Gurney.

The next partnership between Cowell and Pavey did bring some optimism. The confidence of in-form Pavey seemed to be brushing off on Cowell as the pair scored freely against West Herts’ spinners. Pavey did well to rotate the strike while Cowell played his usual unorthodox strokes to manipulate the field – on one occasion striking Arjun Patel for a big 6. With the score on 144-4, Hertford were up with the rate and well-set with Cowell into the 60s and Pavey looking in good touch. It was therefore disappointing when Cowell was bowled by Gurney for 63 but it was pleasing to see the vice-captain back to his efficient best. In at 7 was Rob Slater and he seemed to pick up where Cowell left off, striking several boundaries to keep Hertford’s slim hopes of victory just about alive. This optimism was short-lived, however, when Slater was bowled for 22 which meant Hertford would now shut up shop to deny West Herts of a crucial victory which would have meant them leap-frogging Hertford in the league.

Pavey and King negotiated the remaining overs, finishing with 31* and 12* respectively. Hertford remain 3rd bottom in the league, 7 points ahead of West Herts who were on the favourable side of the draw, points-wise. Next week Hertford travel to North Mymms who are 1 position above them.