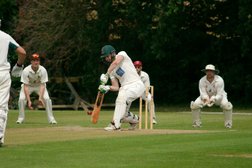 Hertford’s veteran skipper, Scott Ruskin, won the toss and chose to bat as he eyed Hertford’s first win since the start of June.

On a deteriorating wicket, opening pair, Will Ray and Jamie Riddle, knew they needed to set an imposing total against the in-form visitors.

Ray was fortunate to escape an immediate scare as Harpenden’s left arm quick, Andrew Neal, rapped him on the pads with the first ball of the game. He was not so lucky two overs’ later as a similarly sharp in-swinger from Neal left the umpire with no choice but to send him on his way.

Ray’s unusually early departure brought to the crease Richard Leather, who was looking for runs following his recent return from a lengthy spell out due to a knee injury.
Leather had not had time to settle when Neal struck again to remove Riddle for 14 thanks to a well-taken catch at second slip. Unfortunately for the hosts, Cowell was quick to follow in similar fashion, leaving them 24-3 and needing to rebuild if they were to set a challenging total.

Just as Hertford thought they may have found their feet in the innings, their busy number 5, Adam Carlson, set off for a quick single before an unlucky slip left him scrambling and short of his ground as the bails were removed.

Harpenden were comfortably on top and continued to bowl with confidence on a wicket that was testing for any new batsman. It did not take long for another chance to come for the visitors with Pavey providing a simple catch to mid-off to reduce Hertford to 48-5.

James Leather strode out to join his brother at the crease with 40 minutes to go until lunch. Both batsmen are known for their attacking mentality and were keen to take that attack to the Harpenden bowlers.

The 30-minute period before lunch was crucial for the hosts as the Leathers found some much needed fluency. They rode their luck with a free-flowing approach that halted the advances of the visiting attack. Just before lunch, Richard Leather brought up his half-century and his side’s 100, meaning they could take some comfort in their situation as they went to the interval.

After the break, the brothers went straight back on the offensive. Taking advantage of a becalmed bowling attack, they continued to score important runs for the home side before James Leather, trying to play down the ground, returned a catch to the bowler for a hard-earned 32. He was quickly followed by two others as the home side slipped to 137-8

A below par score was on the horizon when the hosts’ captain, Scott Ruskin, walked to the middle. Knowing he had overs to play with and Richard Leather set at the other end on 71, the pair batted responsibly to rebuild once again and push on for a challenging total.

As they neared the end of the innings, they hit the accelerator. Richard Leather pounced on the bowlers and before you knew it, a flick off his pad into the leg side brought up a stunning century from only 134 deliveries.

The fifty partnership for the ninth wicket soon came before Leather was finally removed just shy of his side’s 200, stumped off the bowling of Jack Doyle for a superb 108.
Some final flourishes from the captain (36) carried his side to 216-9 from their 60 overs, leaving Harpenden a tough chase on a difficult surface.

Hertford knew early wickets remained crucial to their success against a strong top order and, with 18 overs until the tea break, opening bowlers James Leather and Andrew Knight had a chance to attack from the off.

Knight, hoping to carry on his good recent form, started strongly, beating the bat of Nick Lamb in his opening over. Much like Harpenden’s start, he only had to wait until his second over to draw the edge of Lamb, which was held well by wicket-keeper Cowell.

Leather was soon in on the action, too, clean bowling new batsman Beasley for 4. Two wickets quickly became three as some ill-advised early aggression from Andrew Neal led him to chip Knight to mid-off.

Rob Slater, replacing Leather, struggled to find his rhythm early before producing two testing deliveries in his second over to draw both Scott Galloway and Aaron Burrage into tame cross-batted shots to drag-on to their stumps.

Slater’s inspired spell continued with a sharp swinger that took the edge of opener Latham’s bat and was pouched by Carlson at second slip. Hertford’s early pressure reaped rewards as the visitors found themselves with a mountain to climb at 44-6.

Harpenden looked to Alex Axon to provide the same inspiration that Richard Leather had for Hertford. He started well just before tea, dispatching Slater and Knight for a number of boundaries and took his side to the break 150 runs behind.

Refreshed after the interval, Leather returned to the attack with license to bowl fiercely against the Harpenden middle order. Sensing an opportunity with the short ball, captain Ruskin dropped himself to the deep square leg boundary. Along came the short ball to an obliging Axon who hooked straight to the skipper for 32.

The short ball worked a treat once more in Leather’s following over as he picked up his third wicket thanks to a faint glove through to Cowell.

At 98-8 and with more than 30 overs to bat, Harpenden were not willing to hold on for the draw, choosing to play expansively as defeat closed in. Young off-spinner, Tom Orchard’s attacking length quickly undid the number 10, who drove hard to mid-off, leaving the hosts needing just one more wicket to seal the points.

An aggressive cameo from the visitors’ number 11 took them to 140-9 before the captain turned back to his disciplined opening bowler, Knight. It only took him three balls to take his third wicket and Hertford’s tenth, when Dan Bradley fittingly skied a full delivery into the grateful hands of man of the match, Richard Leather.

Next weekend Hertford travel to Totteridge Millhillians looking for back-to-back wins to firm up their survival chances.