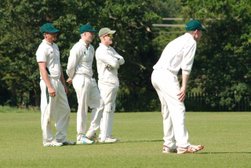 Hertford were comfortably beaten thanks to a professional performance from league leaders Radlett to leave them chasing a victory on the final day to avoid a relegation play-off.

Hosting Radlett on the penultimate weekend of the season, Hertford were looking for an unlikely win to all but cement their Premier League status for another season. On what looked like a flat wicket, Radlett won the toss and elected to bat first as they eyed a win to take the league title.

Despite the early wicket of Jenkins, Radlett were able to get off to a fast start with Josh De Caires and Glamorgan pro, Joe Cooke, taking the attack to the Hertford opening bowlers.

Cooke took a liking to Knight on a wicket that didn’t offer much for the bowlers. He raced to 20 with a series of expansive shots that included a powerful straight six to leave Hertford fearing the worst with the total rapidly nearing 50.

The quick start had meant that chances were forthcoming however, and some flashing drives led to two half chances that could not quite be grasped. Knight was soon able to make the breakthrough though as Cooke mistimed a flick across the line to provide a high return catch to the bowler, well taken over his shoulder.

After the rapid start, Hertford sensed an opportunity to bring the game back under control. They turned to Dan Orchard in an attempt to check Radlett’s advance. Whilst the rate came back under some control, De Caires and captain Kabir Toor rotated the strike with relative ease to keep the scoreboard ticking.

Radlett’s century came in the 18th over before Dan Orchard struck with a nipping delivery to remove Toor for 36. Some disciplined bowling followed from the young partnership of Orchard and Underdown and the pair toiled away through the middle overs.

De Caires continued unabated as he pushed past his fifty and, in partnership with Fraser Crawford, edged the visitors towards the 200 mark. Their approach epitomised Radlett’s overall performance, rotating the strike and capitalising on the bad deliveries to continue punishing the hard-working Hertford attack.

Off-spinner Lawrance removed De Caires but partnerships continued to build throughout. Late wickets from Leather and Underdown were consolations for Hertford as the depth in the Radlett batting line-up proved too much for the hosts.

Radlett used their final overs well to post an imposing 294, showing exactly why they are leading the league. At the change of innings, Hertford knew nothing but an exceptional batting display would be enough to secure the 25 points.

A controlled and watchful opening few overs from Will Ray and Richard Leather were just what Hertford needed in an attempt to establish a foundation for the run chase. Nevertheless, it was not long before Radlett found a higher gear to disrupt the early progress.

Having reached 28 without loss, Hertford soon felt the wrath of Radlett’s opener, Randeep Sanghera, followed by the wily leg spin of Kabir Toor. Quickly reduced to 34-3, the hosts’ hopes of chasing down the mammoth total were in tatters barely 10 overs into the innings.

Youngster, Max Lawrance, came to the wicket off the back of some fine second team form looking to stabilise the Hertford innings and rebuild in partnership with Ray. However, the partnership was not to last, as Ray was trapped in front by Toor for 25 and Hertford found themselves deep in the mire.

You could have been forgiven for thinking that the two teams had batted on different wickets. Radlett’s dominance with the ball closely replicated that shown with the bat, and as quickly as Hertford could see off one bowler, another would replace them to probe away at the becalmed batting line-up.

Radlett’s all round strength continued to show as fifth bowler, Anthony Hill, soon removed Carlson and Hertford slumped to 48-5.

The rain clouds that closed in were a perfect metaphor for Hertford’s afternoon. Just as the score staggered past fifty, both Leather and Ruskin were removed and Hertford, seven wickets down, looked out of ideas.

The brief rain delay that followed acted as welcome respite for the hosts who were unable to get close to a Radlett side edging towards a deserved league title.

A mature innings from Lawrance went unrewarded once play resumed. Unable to find a partner to support him, the remaining three wickets fell for just 12 runs. He finished not out on 22, showing real promise and grit in an otherwise underwhelming batting display.

A 212-run defeat was not ideal preparation for Hertford ahead of next week’s encounter with already relegated Bishops Stortford. A win will ensure they stay in the top flight, but anything less will leave them looking nervously over their shoulders at the results of their rivals come the end of play.