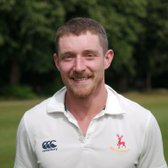 An inspired bowling display from Adam Carlson guided Hertford to a huge win over Championship-bound Bishop’s Stortford in their final game of the 2019 season.

Hertford traveled to Bishop’s Stortford seeking a final day victory to secure their Premier League status. Preferring to bat first, Hertford were put into the field by a Stortford side with nothing but pride to play for.

Having bowled well when the two teams played out a draw in their first encounter, Hertford knew that a strong performance was needed on an unpredictable late-season wicket at the Cricketfield Lane ground.

For what they were hoping would be the final time this season, James Leather and Andrew Knight shared the new ball as they looked to restrict the hosts to a total that would be reachable later in the day.

Leather was able to make an early breakthrough, drawing an edge from Bassingthwaighte to bring Stortford’s danger man, Reece Hussain, to the crease. The Hertfordshire pair of Hussain and Chatfield posed the biggest threat of the day for Hertford and breaking it early would be key to their success.

Playing with the freedom afforded to them by their confirmed relegation, Stortford hurried to a run-a-ball 42 before Leather struck twice in two balls to swing the game in his side’s favour. He enticed Chatfield into a mistimed drive to mid-on before instantly sending Burslem’s off stump cartwheeling much to the delight of his team mates.

Replacing Leather was Adam Carlson, recently reverting to bowling seam having been Hertford’s leg spin option for the past few years. An unlikely choice, perhaps, but the unpredictable nature of the wicket made it an interesting option for the visitors.

Throwing Carlson the ball proved to be an inspired decision. His impressive control immediately brought the prize wicket of Reece Hussain whose uppish drive was safely pouched by Will Ray at short mid off.

Much like Leather earlier in the day, one wicket quickly brought two. In fact, four came quickly for a buoyant Hertford, with Carlson taking three in his first two overs.

Proving himself to be quite a handful with a seaming and swinging ball, Carlson was not done there. Taking the bull by the horns, he delivered an incredible five wicket haul in only 28 deliveries. In doing so, he moved his side one step closer to maintaining their place in the Premier League.

Carlson’s sixth wicket wrapped the innings up. His performance, taking 6 wickets, for 6 runs in only 5.1 overs will sit near the top of the league’s best bowling displays of the season. Indeed, it will be rightfully take its place as one of the club’s all time best performances.

By bowling Bishop’s Stortford out for 83, Hertford had all but delivered the win but they knew that it was vital to maintain their concentration so as not to waste Carlson’s work.

Will Ray and Richard Leather entered the fray with the focus needed to deliver the victory for their side. Fully aware of the possibility that the wicket may misbehave, the pair started watchfully against a bowling attack with a mountain to climb.

Demonstrating the challenge the wicket still posed, a short ball from opening bowler Matt Pike held in the wicket, forcing Leather to drag onto his stumps. At 7-1 some nerves were understandable from the visitors, but the early wicket provided the stimulus needed to ensure they did not slip up.

Ray, Hertford’s highest run scorer for yet another season, was focused on delivering for his side. He was able to settle any remaining nerves and work in partnership with new batsman, Ian Harris, to efficiently knock off the Stortford total.

Maintaining his late season form, Ray did not give the hosts a sniff as he pursued another half century to continue his strong late season form. Bringing up his 50 in the 20th over he was able to sit and watch as Harris hit the winning runs an over later.

Carlson’s heroics earlier in the day will be the major talking point as Hertford go into the winter knowing they will once again be walking out as a Premier League side next season.

Early start time this week, massive game for survival - get to Stortford for 10.15am or earlier if you need a lift or can't go direct please let Scott know.

Best of luck - see everyone back at the club after the game for beeeeers!