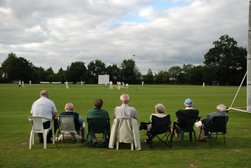 Hertford 2ndXI were welcomed to their Division 2b league campaign by being rapidly shoved into bat by Bushey on an unnaturally wet deck at Balls Park.

Openers Golder and Lyte decided that the best way to tackle a pitch of this kind was to take inspiration from their calypso cricketer-brethren. As the reader might anticipate, this approach was soon put into the ‘foolish’ category after both perished in the embryonic overs. Luckily Dawson, notorious for his damp-pitch technique, dug-in and played a sensible knock to get Hertford aiming in the right direction. After he departed for 22 following an over-sensible pull shot, this brought Ray and Carlson together. The latest pair were classy in their rotation of defence and attack, and belligerent in their running between the wickets in adding 93 for the 3rd wicket.

After Ray was out for an excellent 58, captain Chandler continued the momentum with Carlson who sadly was the victim of a ‘glove slip’ on 63 and was caught on the boundary. With Hertford on 209-6 they looked to up-the-rate – Mr Tickle (T Orchard) decided to turn a one into a two forgetting that he had Mr Jelly for a partner, Chandler was left short of his ground for a decent 33. Orchard supplied a cameo but the lower order subsided and Hertford finished on 216 all out from 48.4 overs.

The pitch seemingly flattened out just in time for the Bushey innings when the opener Abbas took a liking to D Orchard’s bowling. Luckily the wily Rhodes was on hand at the other end to prevent any disasters and soon dispatched with both openers in his usual frugal spell of bowling.

Following this, T Orchard and the tailormade-Thompson bowled excellently in tandem squeezing the opposition and taking 5 wickets between them at regular intervals. Carlson kept up the good work, but thanks to a 70 run partnership between the Bushey number six and number nine Hertford were suddenly on the backfoot.

Bushey needed only 25 runs, with 3 wickets and plenty of overs remaining… enter Ben Golder. Golder dispatched one Bushey run-maker in a composed 4-over spell whilst T Orchard returned to take another. With 1 wicket remaining, but only 10 runs to win, Golder held his nerve to tempt Asif into playing the big shot which saw the ball spiral to Orchard at point!

Hertford had won a great season opener with a selection of excellent performances from a number of individuals. Next up is a local derby against a strong Allenburys side – another 30 points would be superb!