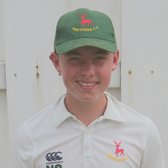 After being on the receiving end of a deluge of biblical puns in last week’s match report, Noah Osborn arrived at Cockfosters on Saturday with a steely look in his eye. Six hours later, he was the undisputed man of the match.

Cockfosters won the toss and chose to bat on their home surface, but their approach to doing so can only be described as inexplicable. A respectable but by no means perfect opening spell from Ben Orchard conceded just 11 runs from 6 overs, whilst at the other end the returning Tony Rhodes was not at his penetrative best but still returned figures of 10 overs for 11 runs. The pitch was tacky, but hittable balls were missed out on and when Ollie Ray ran out one of the openers Cockfosters were on a mere 25-1 from 18 overs. Tom Orchard and Dave Beardsley entered the attack and bowled well but did not make further breakthroughs.

Enter Osborn. The left-arm tweaker bowled the surviving opener with a ball that cut back sharply, and then beat his next victim with a flighted delivery which trickled off the batsman’s foot and removed the bails. A hat-trick was on the cards. Although he missed out on a hat-trick, Osborn grew in rhythm, and was turning the ball appreciably by his fourth over. At one point he even smiled. After taking a straightforward caught and bowled, Osborn claimed his fourth victim when his opponent rather optimistically charged down the pitch and missed the ball by some distance. Wood - impressive all day behind the stumps - removed the bails.

Osborn’s one man show was only interrupted by a run out and Brad Dawson picking up two lbws, and by the close of Cockfosters’ innings the young spinner had returned figures of 6-18 from 8.2 overs.

Hertford’s chase began smartly, with crisp drives from Wood and Joyce puncturing the gaps between the Cockfosters fielders. As so often with the 2s, however, this was not to be a straightforward run chase. Joyce and Wood were both dismissed with the team’s score in the 30s, and when Hugh Cavener was adjudged caught behind in identical fashion to the previous week, Hertford had lost three wickets for 15 runs. Ollie Ray (33) took on the burden of the scoring, so much so that the umpire told him off for hitting the ball into the BP garage. However, it wasn’t to last. 86-4 became 86-7, and Rhodes began uttering his battle cry to the lower order batsmen, ‘this is what we play for gents!’ It did nothing to calm the nerves.

It was the turn of Tom Orchard and Noah Osborn to combine at the crease. After some calm rotation of strike, the former reacted badly to the bowler’s jibe about his muscular mass, plinking a pull shot for 4 in a demonstration of ‘power’. Osborn continued solidly, striking a pleasing 4 through the covers. As the shadows lengthened across the ground, and injured captain Chandler ran out of beer, the score nudged ever closer to the target.

But then, just as numbers 10 and 11 thought they would not be required, Tom Orchard tried to finish the game with a straight drive, only to be caught at mid-on. Fortunately, no further wickets were lost and Noah Osborn fittingly turned a short delivery away to the fine leg boundary to complete a two-wicket win which sends Hertford to 2nd place in the table.