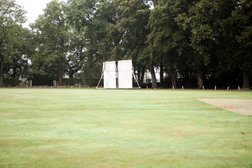 Hertford 2’s travelled to Radlett to play their 2ndXI and were greeted with the same wicket that the 1st team had capitulated on the week before.

This was a well, well-used pitch and the home team were only too aware of this – thinking it would hardly improve, Hertford one the toss and chose to bat.

Openers Joyce and R Leather, the latter returning for his first game since a knee operation, were greeted with an impenetrable ring-field and some tidy bowling first up. As expected, the result of this was very few runs and the difficult decision for the batsman of whether to stick or twist – Leather took the twist option and threw his hands at one sadly this was the wrong choice.

What followed was a long period of the Hertford’s batting order struggling to get the ball away against some tidy bowling and steadily succumbing to the pressure. The spinners entered the game and tied Hertford down, Joyce was the only one who managed to find any timing or fluency but he also fell in the pursuit of runs.

After the top order subsided and the lower order offered little resistance the only other member of the team who managed to make a score of note was Beardsley who applied himself well for 29 not out but eventually ran out of partners.

Hertford were all out for 125 but had used up 49 overs which should give the reader a good impression of what the pitch was like. Captain Joyce decided to open with a mixture of spin and seam and so Ryan and Rhodes and opened the attack. Both proved to be frugal with runs offering very little to the opening batsman but also unable to get an immediate breakthrough.

Joyce swap the bowling changes around searching for a wicket, all bowlers offered little for the batsman to hit but Radlett kept on accumulating and found themselves on 59 before the first wicket fell courtesy of Cavener. Ryan then came back into the attack and took another two wickets but Radlett were still steadily compiling runs. A rain shower came at just the wrong time for Hertford as well, freshening up the pitch just as it was really taking some turn.

In the 34th over Radlett had overcome Hertford’s total and were only 3 down despite some decent bowling from Hertford. Despite the difficult pitch, Hertford will know that when it comes to batting the top order need to learn to rotate and find scoring areas against spinners on pitches that are turning – 50 extra runs could have been the difference. Next week the 2s start the 2nd half of the season away to Bushey and hope to get back to winning ways!