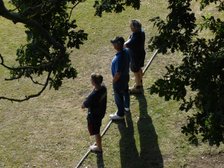 A quick check on the definition of cliché in the Urban dictionary defines it as of French origin from the verb “clicher” meaning “to stereotype". In other words a once innovative and original saying has been overused and is now considered unorigina

The alternative view of this is the saying is overused because it is based on fact and is a truism. So the reality of yesterday game is summed up with a cliche that supports both views. Catches win matches and we simply dropped too many to expect to win the game. Nobody ever drops a catch deliberately and there were many apologies during the game and after... which is a good sign that we cared but the brutal reality is our loss on Saturday was mainly self-inflected.

A great opening spell of bowling shared between Angus Kildare and Flynn Ruskin saw wickets shared as both openers were clean bowled, the former bowling 9 straight overs for 1-20. The exemplary bowling was continued by Andre and Dave Benham and the pressure told as both batsmen found themselves at the non-strikers end and Nick Horton’s throw from the deep was relayed by Angus to keeper Del Reddy who completed the formalities. Hemel Hemstead were now under a lot of pressure with three wickets down, the ball swinging and a run rate of 2 an over. We then dropped three simple chances from the luckless Dave Benham (who also bowled 9 straight) and with wickets in hand and featherbed wicket the pressure was relieved and Hemel’s batsman could simply pick the line and put their bats through the ball and no amount of fielders could protect piercing the short boundary.

To Hertford’s credit we did not give up and although Hemel racked up 251 runs we took 8 wickets with Andre returning for his now familiar “death” wickets, a Nick Horton direct hit run out and a well directed Flynn bouncer saw off one of the set batsmen. Might be important in the final analysis at the end of the season.

Hertford’s reply contained tight Hemel bowling, punctuated with some tired looking shots of players who had been chasing leather in the sun for too long. However as with previous games the tail wagged and Angus and Dave Benham (who both showed tired legs are not really an excuse!) completed a fine all round displays with 26 and 32 not out respectively. The return of the opening bowlers put an end to the festivities and Hertford were bowled out for 145, a least we got 3 batting points when zero was looking the bookies favourite at one point.

All this leaves us with a relegation shoot out with WGC next week, they are 26 points behind us and a win will ensure safely, a loss will mean the lottery of points on the final day.

Special thanks to Del Reddy who played through niggling injury as we were short and took the gloves for the day in the absence of our regular gloveman. Finally a shout out to Tim Camp and Eric Riddle who made welcome first appearances for 4s, again much appreciated.