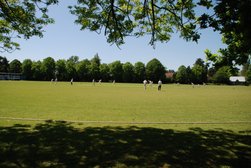 The 2017 season began at Balls Park with an Easter Sunday fixture against Roving Reporter’s.

Pavey and Barker opened the batting on a typical April-wicket and after some variable bowling to start with, had to negotiate the opening bowlers with slightly more caution. This caution, delivered a partnership of 75 at 7 runs per over, the bad balls were well punished and Barker dismissed a number of good balls back over the bowlers head. After Barker departed for a fluent 39, Riddle joined Pavey and was quickly into his stride, adding 23 of his own runs in very good time. After Riddle attempted one shot to many, Davis came into bat and surprised everyone by launching Rogan for 6 after only a handful of balls.

Whilst Davis was busy peppering the boundaries, Pavey had made his way to a gnarly half-century, before making his intentions clear by hitting consecutive sixes. A few more boundaries followed before being run-out for 79. Lawrance joined Davis – who still looked in excellent touch, and after a few quiet overs they began to up the run-rate and push the fielders. This resulted in Davis being caught short of his ground for an excellent 47 – which really deserved to be a fifty. 3rd XI captain Cooper joined Lawrance for the ‘slog-overs’ and they both contributed good 20’s - leaving Hertford with an imposing total of 261-6 from only 40 overs.

Dawson and Benham opened the bowling and bowled enough good balls to prevent the Reporters from a quick start. Benham improved during the course of his spell. Dawson bowled well throughout and was unlucky to only pick up the one wicket of Mills who skied one to Lawrance at mid-off. Dan and Tom Orchard were the first-change bowlers. Tom found considerable turn and immediately troubled the batsman and Dan found a very good line and length. Dan - unlucky not to pick up a wicket in his 5-over spell with a number of runs coming from edges over the slip cordon was replaced by Hugh Cavener as the batsman began to attack.

Tom proceeded to gut the Reporter’s middle order and finished a good spell with figures of 3-45 off 8 overs. Cavener took a wicket as well but found himself on the receiving end of a number of big hits. Max Lawrance came into the attack and bowled well immediately. He was rewarded with 2 wickets from his 5 overs as the spinners procured six of the seven wickets.

The seam bowlers effectively ended the game with their tight spells up-front and the young spinners carrying on the good work in the middle overs – which meant that the Reporters were left 217-7 from their 40 overs. Surprisingly pleasant weather, a good opposition and everyone getting a good chunk of the game meant this was an excellent, winning-start to the 2017 season!