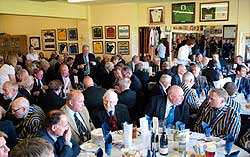 Being elected a Vice President at Hertford RFC is a recognition by the Club's Board of Management of the services and time dedicated by a Club Member for a role performed within the Club, be it on or off the pitch.

Vice Presidents do not have to pay a specific VP Membership Fee but instead are requested to make a donation. It is hoped that this will be for at least the equivalent amount of the basic Club Membership Fee which for the 2017/18 Season is £60, but all amounts are gratefully received and appreciated.

These donations provide a vital source of income to the Club and it should be stressed that all this income goes towards the Club's general running expenses. They also greatly assist the Club's cashflow at the beginning of the season when there are a significant amount of expenses to be covered.

As a thank you for their donations the Vice Presidents are invited to an exclusive annual lunch held before a 1st XV home league game.

VP ties can be purchased from the Club's shop as can be a new range of leisure clothing featuring a small discreet "H" logo. These items can also be bought on-line by visiting the Club's shop page on this website.

Vice Presidents are elected annually at the Club's AGM held in June / July. Nominations and reasons for making a Club Member a Vice President should be submitted in writing to the Chairman of the Club by the end of April.