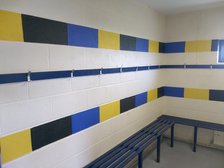 Sad loss of another Vice President of Hertford RFC.

I'm sorry to have to announce the death of another of our 'Old stager' members this week.

Rob was not a local man any more so will not be known to most who joined us in the last 20 years but will be remembered by the old guard as a thoroughly nice man. Whilst no longer a regular on the sidelines at Hoe Lane he would always try to to make the Vice Presidents lunch and game afterwards.

Rob was a regular member of Ant Irwin's 'Termites' team in the late 70's when I played with them as a teenage interloper and can remember his inimitable galloping running style more akin to Aintree than the Olympic park.

In rugby you learn something from everyone you play with, even if you you don't realise at the time. I remember from those days that Rob was not a man to forensically examine your game, his conversation would be about whether you enjoyed the game, a concept as important in today's professional era as ever and something I always try to remember.

Rob was also a member of a small band of Hertford RFC Elder statesmen who would make an annual pilgrimage to France to commemorate the Armistice.