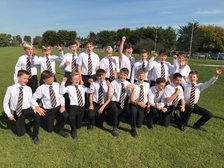 Hertford hold their own despite Saracens reinforcements

We started fast and aggressively, immediately putting the overhead conditions (now in our favour) to good use and planted ourselves firmly in the opposition 22. We pinned them on their try line and time after time we got close but no score. Sarries were giving away penalty after penalty at the breakdown and as a result we were unable to get the continuity and quick ball to create space out wide. With the excellent ref getting increasingly frustrated and repeatedly warning the Sarries to get hands off the ball, we finally managed to suck in their defence and release the backs with a “magic” ball move to the wing (Kieran E) going over for a great team try in the corner (9mins - unconverted).

From here we had the feeling that we could get more tries to equalise up the overall match score. However, Sarries came back hard at us and our play lacked some game management skills as we failed to use the conditions to get position and territory. Sarries capitalised on our failings and got over our try line themselves on 17 mins and converted to take the lead.

Hertford came back from the disappointment of going behind with arguably our best attacking play of the match. A kick from Sarries had our fullback (Joseph) sweeping back deep into our half to collect the ball, fixing his man and then releasing our wing (Hamish) with a neat offload following a superb supporting line run, he then showed he had the pace to get past the despairing thin air tackles from Sarries. The try was converted and Hertford were back in the lead.

Sarries, rang the changes and bought on more reinforcements and with several PDG players available to them they were not going to let us take this game without a fight. With only a couple of minutes to play left they were able to get over the line and convert the try to leave the game tied at 12 all. A good effort from the lads overall.