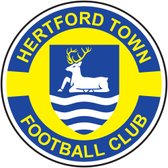 Charlie Ruff’s stunning 20-yard volley to give the Blues a 56th minute lead was probably deserving of all three points in their first game of the season in the newly formed South Central Division.

Charlie Ruff’s stunning 20-yard volley to give the Blues a 56th minute lead was probably deserving of all three points in their first game of the season in the newly formed South Central Division. Wasted opportunities and a rare defensive lapse, however, saw this well-fought and energetic clash end with the teams sharing a point apiece.

On the balance of play over the course of the ninety minutes, both teams would have probably been relatively satisfied with the result in that the dreaded prospect of an opening day defeat was avoided.

On a pitch made difficult by this summer’s drought, the hosts started the stronger of the two teams with the Blues struggling to retain possession of the ball. There was little goalmouth action, though, and by the time fifteen minutes had elapsed the Blues had begun to get a foothold in the contest. The Blues were now playing at a higher tempo and were winning free-kicks in the final third with some lively attacking play.

As the game progressed it was the Blues who were looking far more likely to score and Charlie Mann, in the Blues’ goal, was only seriously called upon once when he made a straightforward save at his near post in the 36th minute.

At the other end, Tommy Wade, Charlie Ruff and Matt Thomson (with a free-kick) all had good efforts on goal blocked or deflected wide and Tommy Wade saw his header into the top corner ruled out for offside a minute or so before half-time.

Despite all of this, the match remained scoreless at the half-time break although the Blues will almost certainly have gone in feeling the more confident about the outcome.

The Blues started the second half brightly and in the 11th minute of the half they took a deserved lead. Matt Thomson’s free-kick into the box was aimed at the head of Ollie Sharman and, although he couldn’t win the ball, he did enough to cause a weak clearance to the edge of the ‘D’ where Charlie Ruff spectacularly volleyed it into the top corner of the goal, giving the home custodian no chance of a save.

This goal could, and should, really have led to more. Four minutes later Ben Ward-Cochrane shot wide after good work between Joe Clemo and Charlie Ruff and only seconds later Tommy Wade also shot wide after good link-up play with Ben. Further chances fell to Charlie Ruff and David Keenleyside although, in the former’s case, it looked to many that he had been fouled in the box as he was about to get his shot away.

In between times, Charlie Mann was called upon to make a sharp save with his feet but, other than this all the play belonged to the Blues. This briefly changed, however, when the home side brought on substitute Koh Lockhart-Adams with 24 minutes remaining. He immediately found some space down the Blues’ right and his low cross was stabbed home at the near post by Bradley Wilson for a surprise equaliser.

The rest of the game then passed without incident until the first minute of time-added-on when Charlie Ruff tricked his way past three defenders only to see a great save from the home keeper deny him what would have been a truly outstanding winner and all three points for the Blues.

A creditable draw was the final outcome, though, and one which left both teams looking forward optimistically to the rest of the season.