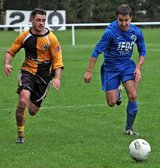 A good display not rewarded as we lose 2-0

After last week’s late single goal defeat up in Cumbria against Vickerstown, we travelled to league leaders Fulwood Amateurs which was the only match in the Premier Division to survive yet another rain hit Saturday.

Manager James Smith was away so his assistant Jamie Johnson took charge aided by Reserve Team manager Terry Meadows and club coach Darren McDonald. Only Kevin Cox and Neil Hulme were missing so Johnson was able to field a strong team which would be needed against a Fulwood side who would be hoping to return to winning ways after losing 3-0 to their nearest rivals Charnock Richard last week.

Despite being the only fixture to be played on grass in the whole of the league conditions were not good with the ball holding up on parts of the pitch but thankfully the persistent rain stopped before the kick off. We started brightly and looked the livelier and after 5 minutes skipper Dan Birkby saw his fierce drive palmed away by the Fulwood keeper. From the resultant corner Bob Milton headed over from close range. With central defenders Adam Thompson and Danny Kirk holding their own at the back Joe Griffith had little to do in the opening exchanges. As is often the case the rub of the green always seems to go with the leaders of any league and this was certainly the case on the half hour mark. Richard Burns marauding run down the right saw him cross and Chris Nation at the far post headed the ball down with the goalkeeper desperately appearing to drag the ball back from well over the line. However the officials waved play on and Fulwood went straight down to the other end of the pitch to open the scoring with Brad Fox finishing off a fine move giving Griffith no chance from close range. Fulwood then stepped up a gear and 2 minutes later Griffith was forced to make a fine double save.

We again came out in a determined mood searching for an equaliser with Nation blasting over the bar in the first minute of the half. Fulwood were having to do the most of the defending and Johnson used all three of the substitutes as his side looked the more likely to score. However with time running out Nation got free of his marker and despite having only the keeper to beat he passed the ball across the box in the hope of finding Hogg who would have had the easy task of passing the ball into an empty net but a defender managed to divert the ball to safety. Following this near miss the leaders sealed the points with a breakaway goal from Mitch Newsome.

This coming Saturday we travel to 2nd placed Charnock Richard whilst the reserves will be hoping to play their first game since the end of October last year as they entertain Garstang with both matches kicking off at 3pm.