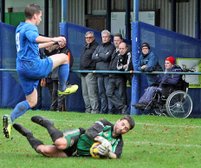 Following a good display away from home at league leaders Fulwood Amateurs the week before we optimistically looked forward to giving their nearest rivals Charnock Richard a close game but a poor first half display put the result beyond any doubt.

Manager James Smith, who missed the match at Fulwood, decided to keep faith with the same starting eleven with defender Kevin Cox returning to take a place on the bench after also being unavailable the previous week.

Within 25 seconds we were immediately a goal behind when David Burrows latched onto a cross from the right to fire home past Joe Griffiths. With the home side dominating in the early stages Griffiths was called into action on a number of occasions as we struggled to get possession of the ball and it came as no surprise when a rampant Charnock doubled the score in the 16th minute. A long high ball caught out our defence and their leading goal scorer, centre forward Carl Grimshaw capitalised and made no mistake. We had to wait until the 20th minute before we had any attempt at goal, skipper Dan Birkby played a neat ball out to Richard Wilson on the right and his shot cum centre fizzed across the goal but we had no forwards sufficiently advanced to turn the ball home. Despite all the Charnock dominance we managed to pull ourselves back in the game after 33 minutes, when a left wing corner was headed into the net via the underside of the bar by Ian Dickinson. However within two minutes Charnock restored their two goal advantage with Burrows adding his 2nd goal. Two further goals before the interval by Grimshaw, therefore completing his hat-trick, confirmed the home sides dominance and we were in danger of getting a complete hiding going in at the interval 5-1 down.

Smith made two changes for the start of the second half bringing on Cox for Josh Roberts at right back and Jack Brierley replacing his brother Josh and this produced a much improved performance in the second half but in truth the match was over as a contest. We had a lot more possession but created very little in terms of reducing the score line and once again Griffith came to our rescue with a particularly good strong one handed save from a powerful Grimshaw header. In the closing stages Chris Nation almost finished off one of our best periods of play but his shot just went past the far post and the second half ended with no further goals.

Weather permitting we hope we can put this match behind us as we entertain Garstang on Saturday which will be our first match at home since the middle of October last year!! Kick off is at 3pm.