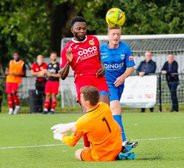 Barking give Swifts the Blues

Swifts returned to the club who knocked them out of the FA Cup at the first hurdle last season against a club who have now moved back to the Isthmian North after a stint in the South Central Division. The home side installed a 3G pitch a year ago and have now settled well with the surface and with a strong back four made life difficult for the visiting attackers who were unable to get through, with the exception of Manny Owusu, who saw his shot blocked by home keeper James Shaw.

Swifts weathered an early onslaught and skipper Joe Claridge headed off the line before Elliot Omuzusi fired home after a corner was partially cleared on 12 minutes. Once again, Swifts keeper Callum Shafer was on fine form and one close range save from veteran ex pro striker Charlie MacDonald was top drawer. Swifts pushed forward in search of an equaliser and again left gaps at the back which were exploited by the home side and Otete added a second in the 67th minute to cap another disappointing loss for Swifts.

With a 2 week break before the next league game at Bury, Julian has time to assess the situation and strengthen the squad where possible.