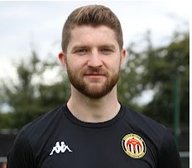 ..but sadly it's not Lewis for Heybridge as his brother Freddie scores in a 1-0 win for Brentwood Town!"

Swifts were down to the bare bones with McFadden, Arthur, Adlington-Pile, Logan & Fennell all injured and Darren Phillips serving the last of his four-game ban.

An early break down the right saw an excellent cross from N'Daw that evaded two Swifts players in the six yard box. Brentwood Town were looking threatening and Callum Chafer (pictured) made an excellent point blank save.
Brentwood went ahead when a break on the left wing after 16 minutes was passed into Freddie Gard who slotted home beyond Chafer.
Swifts had an appeal for handball denied by the referee midway through the first half and Darius Ghinea then was booked just before the break for pulling an opponent back.
The half fizzled out (as did two of the floodlights!)
HT Brentwood 1 SWIFTS 0
Brentwood enjoyed a spell of attacks in the second half but were thwarted by more fine goalkeeping from Chafer - either with great reflex saves or clearing punches. Swifts sadly did not register a shot on target with home keeper Bowles untested, although in the last ten minutes they had chances to level. Lionel Ainsworth broke through on the left but scuffed his shot past the post and with minutes left a ball fell to Manny N'Daw but he slipped before being able to put a shot into goal.
Chris Gregan came on in a striker role when he replaced Dan Walker but time ran out and Brentwood Town won their ninth straight game to take the three points.