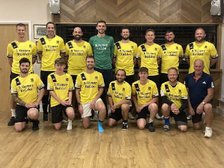 Heyford Athletic welcomed Garsington to the King George for a quarter final this weekend, in a cup that could provide the highest level silverware at the club to date.

The game started quickly with Heyford in control from the off. Movement up front wasn't fully there to begin with and this meant that The Bears weren't attacking to their full potential. This all changed after the moaning manager pointed it out and from then on, the attackers were unplayable. Callum Lloyd opened the scoring with a fine header, following a perfect delivery from John Dent⚽️. Cal doubled the lead with his 21st goal of the season on 20 minutes⚽️. Kieran Chambers made it 3 when he rounded off what was a fine team move (celebration to match)⚽️. James Gregory grabbed the 4th and Stevey G got the 5th⚽️⚽️.

The message at half time was clear, nothing but a solid performance. Goals and a clean sheet. What with playing up hill and having set the bar very high, The Golden Bears struggled to replicate their form the first half and the game was very slow from here on out. Manager Suter rang the changes and Danny Green came off the bench to make it 6⚽️. Garsington managed to kick their way into having some of the possession but never looked likely to breach Heyford's solid back line, led by Steve Roberts, who had a fine game (didn't score though, ha). A bizarre OG made it 7 ⚽️ and a bleak second half drew to a close, with Heyford ascending to yet another Semi-Final.

With all things said and done, this is a huge victory for a team featuring players who haven't had a lot of minutes so far this season. We can take stock here and say we are top of a very good league and in a semi final, not bad for a long ball team.

Big mention again to the support shown, the Ultras and Ressies that turned up were treated to 7 goals, only a fraction of what their support garners and deserves.