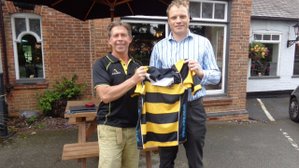 Hinckley R.F.C can tonight announce that Scott Hamilton, a triple winner of both Aviva Premiership and Super Rugby titles, and holder of 2 All Blacks caps will be joining the club for the 2016/17 season.

Hamilton, who spent last season playing for Coventry in National 1, joins the Leicester Road outfit following a glittering career. He has been in the U.K. since 2008, playing for Leicester Tigers between 2008 and 2015. Previously to that he made over 50 Super Rugby appearances for the Canterbury Crusaders alongside Dan Carter and Richie McCaw. His 2 caps for the All Blacks were won in 2006, scoring on his debut against Argentina and then against South Africa in that year's Tri Nations.

Hamilton will also be assisting with coaching whilst at the club, and director of rugby Paul Walsh is delighted to have him on board, having fought off a number of local clubs for his signature. :

Walsh said: 'To have a player of Scott's skill and class with us is a massive boost for everyone at the club, and a huge step forward in our development. As well as making a big impact on the field, Scott's knowledge and experience of high performance environments will help all of our players and coaches to improve themselves in every way. To have a player like Scott join us is a massive statement of our ambition and will help us hugely in our onward and upward development. As well as being a great player with a fantastic pedigree, Scott is an outstanding individual with great values and standards that align with ours as a club perfectly. We're really looking forward to working together'

Hamilton will join up with his new teammates for pre-season beginning on the 5th July, which any player is welcome to attend. His first appearance for the club is likely to be in the pre-season fixture away at Clifton on the 13rd August.