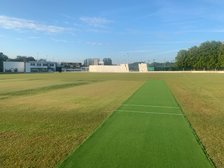 HINCKLEY TOWN CC ARE GOING BACK TO THE FUTURE

HTCC are pleased to announce Giles Holmes & Colin Griggs as captain and vice captain respectively for the 2022 season. Giles returns to the club after 10 years away. He has a burning ambition to be part of a project that develops cricket excellence in the Hinckley area. Colin, although new to HTCC, brings a vast array of experience having played at county level for a number of seasons. Importantly, these guys have sacrificed playing at a much higher level to commit to the development of the next generation of Hinckley cricketers.

After being in the wilderness for too long, HTCC, with the support of Hinckley Rugby Club, has set its sights on becoming one of the premier community cricket development centres in Leicestershire. It has some of the best facilities in the area and has recently added an all-weather wicket to bolster its quality. Plans to improve the hospitality side of the facility are also in place.

With new leadership in place, HTCC’s focus is on supporting the interest of players and volunteers for all age groups. We will be looking to support the following club structures over the next few years:

Looking forward to next season, HTCC has moved fast to build a wider leadership team of top rate cricketers and coaches to support its ambitious plans to include Graham Hall, Martin Ray, Ricky Moran and Ben Avent. Ex-Hinckley premier league player and level 3 coach, Martin Ray will lead the younger player development side of the club. Martin has had huge experience over the years and is really keen to get as many kids as possible playing the game. We know we may not be able to fulfil all the youth structures in the first year but we are open to all new players who want to be part of the HTCC mini and junior development pathway through to senior cricket. Graham Hall is another with vast experience. He has played many years of Leicestershire premiership cricket with Hinckley in the past and will be a huge asset both on and off the field. Ricky and Ben have been invited into the group to bring a wider sporting experience and network, both from a playing and coaching perspective.

In terms of the seniors, the captain and vice captain are really keen to attract new young talent and fit them in with the experienced talents of the playing leadership group so as to create an environment where we can accelerate the development of the youngsters. This is a fantastic opportunity for young players who want to develop to get involved as well as for other experienced players who like the idea of being part of the development project.

Finally, it is also important to note that culturally, we will not be about turn up, play and go. This will not be HTCC’s way. The development of players, parents and coaches will be a full grounding of what it takes to be part of a community cricket club as well as play. It will be about respect, discipline, desire and knowledge as well as a lot of fun!! If you are interested in getting involved then contact Giles Holmes or any of the leadership team on email development@htcc.co.uk.