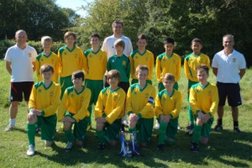 The points were shared as Hawks travelled to Sawbridgeworth on a bright but windy Sunday afternoon compared to last seasons quagmire.

Hawks began well and created a few early chances. A through ball by Liam sent Eliot clear out wide on the left and he controlled the ball well and managed to chip the goalkeeper into the far corner (0-1). Within 4 minutes Sawbridgeworth were level. A cross from the right went right across goal but left 3 players on the ground in the middle and as the ball was crossed back in from the left and bobbled around in the midde an attacker got on the end of it to score (1-1). The home team then took the lead in the 27th minute with a high long range effort that just evaded the Hawks goalkeeper and went into the roof of the goal (2-1).

Into the second half and Hawks continued to push to look for the equaliser. Mathew replaced Jordan in goal and Adam came on up front for Eliot. Most of the possession was theirs but the end product wasn’t coming and Sawbridgeworth were quick to break but the defence stood firm. Neither team created many opportunities and it was quite a stop start scrappy half with the ball out of play quite a bit, substitutions being made and stoppages for injuries. Neither team were shying away from tackles and as the half wore on it looked like the home team would take all 3 points. However 2 minutes into injury time and a cross from Adam on the right was headed on from Tyler and the ball fell to George. He controlled the ball, managed to stay on his feet to avoid 2 tackles and thrashed the ball into the goal (2-2). There was still time for a further 6 minutes of injury time to be played but in the end it finished all square.