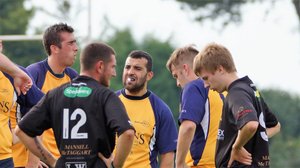 A second win in consecutive weeks for Holbrook at Home to Burgess Hill 3rd Team.
The game started with a knock on from Derick Foster of Holbrook after Burgess Hill Kicking off, thankfully the game didn't follow the trend of the first play.

The first try was an early one from Scrum Half Andy Collins which he then converted from just in front of the post, the game continued in Holbrook's favour with further tries from Jaco De Beer, Sam Bolitho (2), Conner Pascoe (2) Andy Collins (4) Jon Dall, Tom Smith, Sam Marsden and Fullback Joel, with Andy Collins converting 7 out of 13 tries.

The first half was Holbrook stronger performance playing a predominantly "Forwards" game, lots of great tackles and superb support from the entire team, The plays we have worked on in training were executed perfectly with Burgess Hill players passing comment that Holbrook have the best lineout they have encountered so far.

The second half saw a returning player Andrew Stanley take to the field in the second row, Andrew continued to support the team in achieving more tries and supporting the focus on simple heads up rugby, the play was switched in the second half to a predominantly "Backs" game, which allowed our backs to work on their handling and support, which saw newcomer Adam Davies only inches from scoring his first try for the club, a minor handling issue was all that came between him and the try line.

Burgess Hill crept back into the game by scoring a try from a restart, poor communication and handling errors saw burst through the playing waiting to receive the ball and touch down in the corner.

Both teams displayed great attitudes on the pitch working with the Referee for the most part, however, the discipline slipped a little within the last 10 minutes, which was soon bought into check by the Referee.

Thank you to 3 Holbrook Players, Dom Swatton, Michael Holliday & Tom Chapman for stepping up and playing for the opposition when the squad was reduced due to injury, great sportsmanship displayed to step up and assist the opposition.

Holbrook return to the field on 8th October with a home game against Shoreham 2 and hope to extend their unbeaten track.