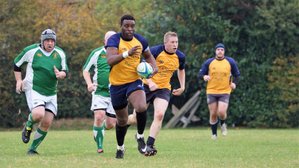 The game started very well for Holbrook with the first try of the game, Holbrook's Derrick Foster knocked the ball on from the kick off giving Horsham the 1st scrum of the game, Holbrook dominated the scrum and the ball went out to winger Jon Dall who made a run for the try line, Jon was tackled and gave the perfect pass to Carl Brewster to open the scoring for Holbrook.

The Holbrook team continued to practice what was rehearsed in training the previous weeks and before the match, Holbrook's game play was looking on form for the entire first half with a further 6 try's being awarded in the first half, including a penalty try. Half time score 43-5 to the home side.

The second half started and Horsham bought the fight back to the game giving the Holbrook pack the hardest time they have had this season and unfortunately Holbrook did not adapt to this new fight with Horsham scoring the first try of the half.

As the second half continued things got rougher and tougher for Holbrook, and eventually the rivalry erupted and handbags were thrown, the referee pulled all 30 players on the pitch together to give them a good talking to about their behaviour before continuing the game.

Scrum Half Joel Murray was the subject and a number of hard tackles and eventually had to leave the field after suffering a knock to the head which thankfully was not serious, the Horsham side had clearly identified Joel as a key link between the forwards and backs and decided to target him every time he had the ball in hand.