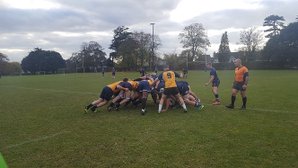 Holbrook turn the tables on Chichester in return fixture

Holbrook met Chichester for the return leg of the league, having suffered a 60-0 loss the last time the two teams met. History was not to repeat itself Today.

Holbrook started the game with intent and made it as close as 5m away from the try line before Adam Davies knocked on earning him his Donkey of the Day award. A Holbrook try was soon awarded as Sam Jenkins crossed the line within the first 10 minutes.

Chichester bought the fight to the game and gave Holbrook their toughest game of the season, Further tries were scored by Captain Connor Pascoe and Vice Captain Rob Boylett which left the half time score at 17-0 to Holbrook.

The half time team talk was a calm on as the squad had themselves identified where they needed to improve and what was at stake by winning the game.

The second half kicked off and Chichester showed their intention not to lost on their home turf, Some very good plays from both sides and some hard tackles meant players on both teams showed signs of hurting. Chichester then spend 10 minutes trying to break the Holbrook defensive line and eventually they saw they saw a gap and took advantage scoring their first try of the game.

Holbrook retaliated with their last try of the game which was converted.
Carl Brewster then had to leave the field due to a rough tackle which caused injury to his neck, this was then followed by a yellow card to a Chichester Prop, upon his return to the field Holbrook's Fly Half was given Holbrook's first yellow card of the season and sat the rest of the game on the sideline.

The game finished with some great phases and tackles from both teams, including the final tackle which injured Holbrook's Tom Smith right on the final whistle.

A great game had by all and as usual Holbrook's singing superstars filled the changing rooms with their beautiful voices, showing teamwork does stop at the final whistle.