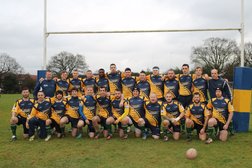 Holbrook continued their Sussex 4 West league campaign and push for promotion with a 49 – 7 win over Hove III. Playing in a new shirt design courtesy of new sponsor Axiom BM Ltd and for the first time since the Christmas break, Holbrook initially looked a little rusty with Hove having almost all the possession and territory for the first minutes of the game. Deep in their own half Holbrook gained possession from loose play and were instantly on the attack through their forwards, who after several phases off loaded to the Holbrook back line with full-back Richard Smith scoring in the corner.
Holbrook gathered well at the restart and were on the attack again through their forwards, but the experienced Hove side defended well and Holbrook were unable to get beyond the Hove 5m line. The Hove defence conceded a penalty and in a well rehearsed move at the resulting line-out, hooker Ben Smith scored for Holbrook. Scrum half Joel Murray was impressive with a number of strong ball carries and was rewarded with a try taking the score to 15 -0. Some good interplay between the Holbrook forwards and backs ended with skipper Connor Pascoe scoring close to half time, their first conversion followed leaving the half-time score 22 – 0.
The second half started well for Holbrook with a text book pick up from the back of the scrum by number 8 Carl Brewster scoring a try but he missed the conversion as Holbrook experimented with a variety of kickers. Despite the growing score line the larger and experienced Hove pack were not making life easy for the Holbrook forwards, who started shipping the ball out to their backs more often. Some very entertaining running rugby followed with trys for winger Ben Carbone, a second for scrum-half Murray, Tom Smith and Chris Blake taking the score to 49 – 0.
A determined Hove continued play a physical and determined game. They spend the final minutes of the game camped on the Holbrook 5m line. A lapse in discipline from Holbrook resulted in a yellow card for their number 8 Brewster and a converted try for Hove. Final score Holbrook 49, Hove III 7.
Holbrook travel down to Shoreham II for their next league game on 21st January.
Share via
FacebookTwitter
https://www.pitchero.com/clubs
Recent news